Mobile phone footage and CCTV captured the moment a gunfight erupted outside a court in Izra, one of Turkey's biggest cities, before a car bomb is detonated killing two people.

By stopping the car, Turkish police think they foiled a bigger attack which they say was plotted by Kurdish PKK militants.

It has different causes and different aims but terrorism is casting a shadow over Turkey and putting security services under pressure as never before.

Turkey's Deputy Prime Minister, Veysi Kaynak said a much larger attack was apparently being planned based on the weapons found at the scene of the Izmir car bomb attack.

"Based on the preparation, the weapons, bombs and ammunition seized, it is understood that a big atrocity was being planned," Kaynak told reporters.

He said the attack, thought to have been carried out by Kurdish militants, would not stop Turkey's military involvement in Syria and Iraq.

Kurdish PKK militants were behind a car bombing outside a courthouse that killed two people in the Turkish city of Izmir, a governor said.

Provincial governor Erol Ayyildiz said a "clash erupted" after officers stopped a vehicle at a police checkpoint in front of Bayrakli courthouse.

"In this clash, terrorists detonated the car bomb while trying to escape," he told reporters.

A police officer and a courthouse employee were killed in the attack, he added.

Police shot dead two of the attackers who were armed with Kalashnikov rifles and grenades.

One policeman and a courthouse employee have reportedly been killed in a car bomb explosion in Izmir.

Izmir's Governor said the car stopped in front of the courthouse before the suspected attackers began a gunfight with police officers using kalashnikov rifles and grenades.

Some of the wounded are believed to be in critical condition.

Two attackers stormed their way into an Izmir courthouse after causing an explosion outside, ITV News understands.

The explosion was caused by a car bomb, the secretary general of the city municipality Bugra Gokce told reporters.

After the explosion - outside Gate C - the suspected attackers entered the building.

Both suspects were killed after being shot by police officers.

Footage recorded inside the courthouse shows dozens of armed security officials walking down the corridors with staff waiting patiently nearby.

Police in Turkey have shot dead a second suspected attacker in the western Aegean city of Izmir.

According to the Anadolu news agency, authorities are now searching for a third assailant.

Ten people are reportedly wounded after an explosion outside the city's courthouse earlier on Thursday.

At least three people have been injured after an explosion near a courthouse in the Turkish city of Izmir.

One vehicle was pictured on fire, with injured people being seen put on stretchers by rescue workers, according to CCN Turk.

Turkish police are reported to have killed one attacker following the explosion. 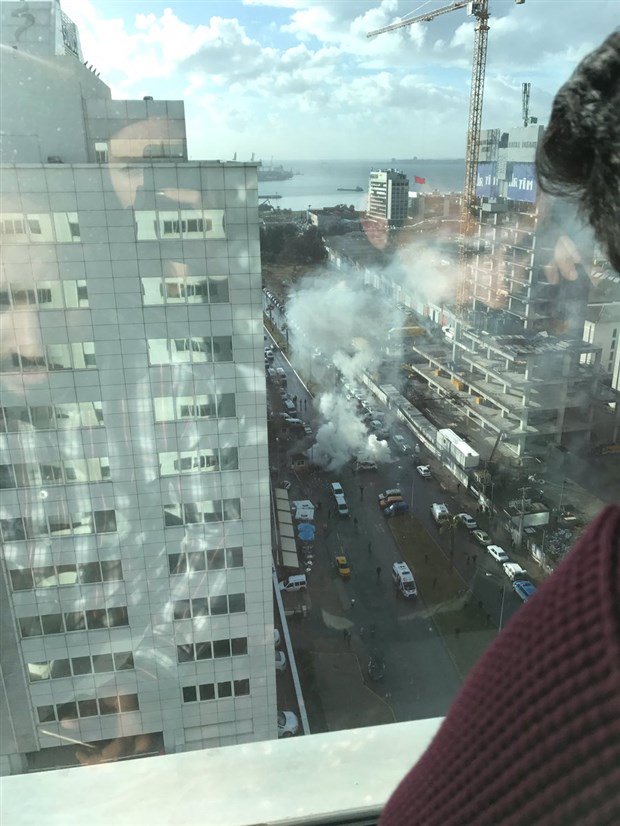