Sandy Cortmann was just 22 years old when he parachuted on to the same drop zone in September 1944.

The skies above a Dutch town were filled with parachutes today just as they were 70 years ago as hundreds of paratroopers recreated the airborne assault that inspired the film 'A Bridge Too Far'.

Thousands of allied troops died during the disastrous nine days of fighting that became known as the Battle of Arnhem.

Paratroopers from Europe and the US have commemorated the 70th Anniversary of the Battle of Arnhem with a mass jump in the Netherlands.

Operation Market Garden, which was the brainchild of Field Marshal Montgomery, saw Allied forces land behind German lines. It was one of the most controversial operations of World War Two and was portrayed in the highly acclaimed film “A Bridge Too Far”.

The British Army said today's events are among the largest multinational parachute jumps to take place in Europe this year. 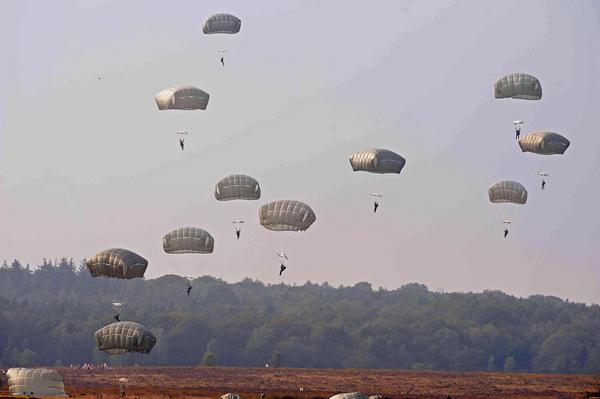 Operation Market Garden was intended to inflict a decisive blow on the Germans, ending the war by Christmas 1944. In all, over 1,500 British soldiers were killed and nearly 6,000 British men were captured.