In a dramatic trailer for Man Vs Wild, Grylls tells Narendra Modi “you are the most important man in India, my job is to keep you alive”.

An ITV News / the Guardian investigation has found major concerns about the businessman behind the project endorsed by Bear Grylls.

Eton-educated survival expert says he struggled at school as he calls for more hands-on classes and life skills training.

President Barack Obama recorded a video urging for more to be done to protect the landscape from the effects of climate change.

Barack Obama is to venture into the Alaskan wilderness with British survival expert Bear Grylls to explore the impact of climate change on the environment for a television programme, it has been announced.

The special edition of Running Wild with Bear Grylls will be broadcast later this year on NBC.

President Obama will meet with Grylls while visiting Alaska to observe the effects of climate change on the area. The two will then come together in the Alaskan Wilderness.

President Obama will become the first US president to receive a crash course in survival techniques from Bear Grylls. The visit will be taped and aired on NBC later this year.

Located on the northwest tip of America, Alaska is known for its icy terrain, mountains and freezing temperatures.

Grylls, who has served with the SAS and wrestled sharks and alligators, has taken a string of celebrities on one-on-one adventures to test their survival skills on the series.

So far, actresses Kate Winslet and Kate Hudson and Magic Mike star Channing Tatum have all taken part in the show.

Eight celebrities may be wishing they hadn't signed up for Bear Grylls: Mission Survive after he challenged them to drink their own urine.

Firefighters arrived after receiving a call that the building was alight but quickly realised it was a false alarm.

Flames were projected onto the landmark as the survival expert abseiled down to launch Bear Grylls: Escape From Hell. Plumes of flame then came up from the ground.

A fire brigade spokesman said: "We were called at 7.50pm. We attended and as soon as we got there we realised it wasn't an incident for us."

He added: "We take every call seriously."

Survivalist Bear Grylls is being investigated by his local council over a slide built on an island that he owns.

The TV adventurer tweeted a picture of the metal slide attached to the cliffside on St. Tudwal's Island West, off the coast of Abersoch in North Wales, with the message:

New slide attached at home on our island! You hit the water very fast!!!! http://t.co/1BmPcFqG8J 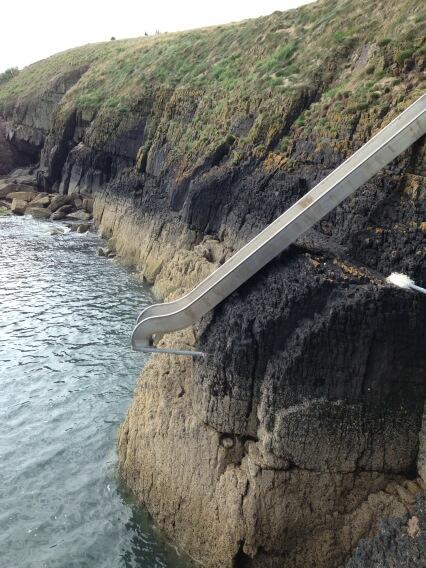 The tweet sparked safety concerns from Gwynedd Council, which said it has launched an investigation into the slide.

A council spokesman said, "Officers from the council's Planning Service are investigating this case and will be discussing the matter with the site owner."

In the video, dubbed The Bear Essentials of Safety, Grylls runs around the New Zealand countryside, stows away his backpack overhead in some rocks, slides a fish under the seat in front of him and nibbles on glow worms.

The Chief Scout even helps some local scouts with their oxygen masks while on a hike.

Grylls said of the video, which can be seen on the airline's flights from today, “I feel so proud to be involved with this campaign. We shot in a truly amazing setting with an amazing team - and that is always a privilege”.

The Queen has honoured hundreds of high-achieving Scouts.

More than 600 youngsters and their families from the UK and around the Commonwealth flocked to Windsor Castle to take part in the annual scouting review.

The Queen, who is patron of the Scout Association, was met by the adventurer and television star Bear Grylls, who is Chief Scout.