Fire crews in west London helped to free the animal, which was said to be distressed but unharmed.

The incident allegedly took place during a trail hunt in Huxley, near Chester.

The animal was saved after becoming tangled in a football goal in Hove, Sussex

The urban critters have been blamed for a spate of cut car brake lines in Tunbridge Wells.

Police said they found the wild animal "scared stiff" and injured with what appeared to be puncture marks after the attack.

Simon King, a presenter of the BBC's Springwatch, accidentally captured a late night snooper on a camera placed in his garden which was meant to film foxes. 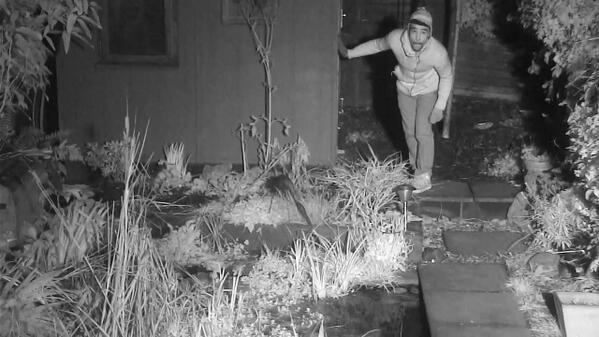 Nothing was taken from Mr King's house in Herne Hill, South East London, but police released the image after the man pictured was suspected of being involved in a burglary nearby.

@sarahjanethomo This is NOT Springwatch, it was our Fox Family cam that captured the image of the suspected burglar.

Mr King appealed to anyone who recognised the snooper to contact the police on 020 7232 6142 or email Marie.H.Hamilton@met.pnn.police.uk.

Ylvis‘ music video “The Fox” has had more than 15 million hits on You Tube in just one week.

The video is the brainchild of Baard and Vegard Ylvisaaker, known as the Ylvis brothers, who while trying to come up with ideas for a new TV show, pondered the question: "What does the fox say?"

The only reason a fox would attack is due to fear, the RSPCA said today after a fox attacked a one-month-old baby. A spokeswoman for the animal welfare organisation said:

It's extremely unusual for foxes to attack young children or anyone.

It's not typical fox behaviour at all. Foxes will come closer to a house if there are food sources. Then they can become quite bold, but they usually do back off and run away when there's people around.

The Metropolitan Police have been investigating a fox attack, which left a one-month-old baby boy with a serious hand injury. A police spokesman said:

We were called at 1638 on Wednesday 6 February by staff at St Thomas's Hospital to reports a baby boy who had been admitted to hospital after being attacked by a fox.

Police attended to find a four-week-old baby with a hand injury. The baby was admitted to hospital after the attack at its home address in Bromley.

Police are investigating a fox attack on a one-month-old baby boy which left his hand seriously injured.

The animal tore the infant's finger off after dragging him from his cot, after it entered his bedroom in Bromley in south east London, according to reports.

The child's mother was alerted by his screaming and rushed into his room to see his hand lodged "halfway down the animal's throat", the Mail on Sunday said.

Surgeons were able to reattach the baby's finger and he was said to be recovering well.