Former French President Nicolas Sarkozy has announced he will run for next year's presidential election.

The terror attacks which have hit France in the past 18 months should not weaken the country's bid to host the 2024 Olympics, President Francois Hollande has said.

Every candidate city faces the question of terrorism. No country is immune.

Indeed the threat is there, but our country is ready to face up to it. And who knows what the world will look like in 2024?

President Hollande arrived in Rio de Janeiro on Thursday to promote France's bid ahead of the opening ceremony.

Several festivals have been cancelled in France this summer as they do not meet security standards.

On Friday, Lille said it was cancelling this year's Lille Braderie, a flea market which dates back to the 12th century, while in Paris an Afghan migrant was arrested on suspicion of plotting an attack on the capital.

More than 200 people have been killed in terror attacks in France since January 2015.

France is to ramp up its military efforts against so-called Islamic State in Iraq following the Bastille Day lorry attack in Nice.

President Francois Hollande announced that France would supply heavy weapons to Iraqi forces as early as next month.

But President Hollande said there are no plans to deploy troops on the ground there or in Syria.

Eighty four people died after Mohamed Lahouaiej Bouhlel drove a lorry into crowds on the Promenade des Anglais on July 14.

Five alleged accomplices have been charged with terror offences.

Francois Hollande today warned Theresa May that she cannot pick and choose among EU rules as the two met to begin talking over a Brexit.

The French president has been among the toughest of negotiators over Britain's planned EU exit.

Today his language was more conciliatory - but he stressed that the UK can't enjoy unfettered access to the single market unless it also allows free movement of EU nationals.

In turn, Ms May insisted that the UK will not be rushed into starting formal talks leading to a Brexit as she said it would take time to reach the right agreement.

Francois Hollande will tell Theresa May that Brexit talks must start quickly when the pair meet today.

The French president is expected to say he does not want there to be any "pre-negotiations".

Mr Hollande and the prime minister will hold talks on Britain's plans to quit the EU when they meet in Paris.

The French President will host a working dinner at the Elysee Palace, a day after Mrs May met German counterpart Angela Merkel.

At discussions in Berlin, the Chancellor said Britain should "take a moment" over its plans to sever its ties with Brussels but warned against leaving the negotiations "up in the air".

Theresa May and Francois Hollande will discuss Britain's plans to quit the European Union when they meet for talks on Thursday in Paris.

Theresa May will visit European leaders on her first overseas trip as prime minister.

President Hollande is holding a meeting with his security and defence team after the attack in Nice. 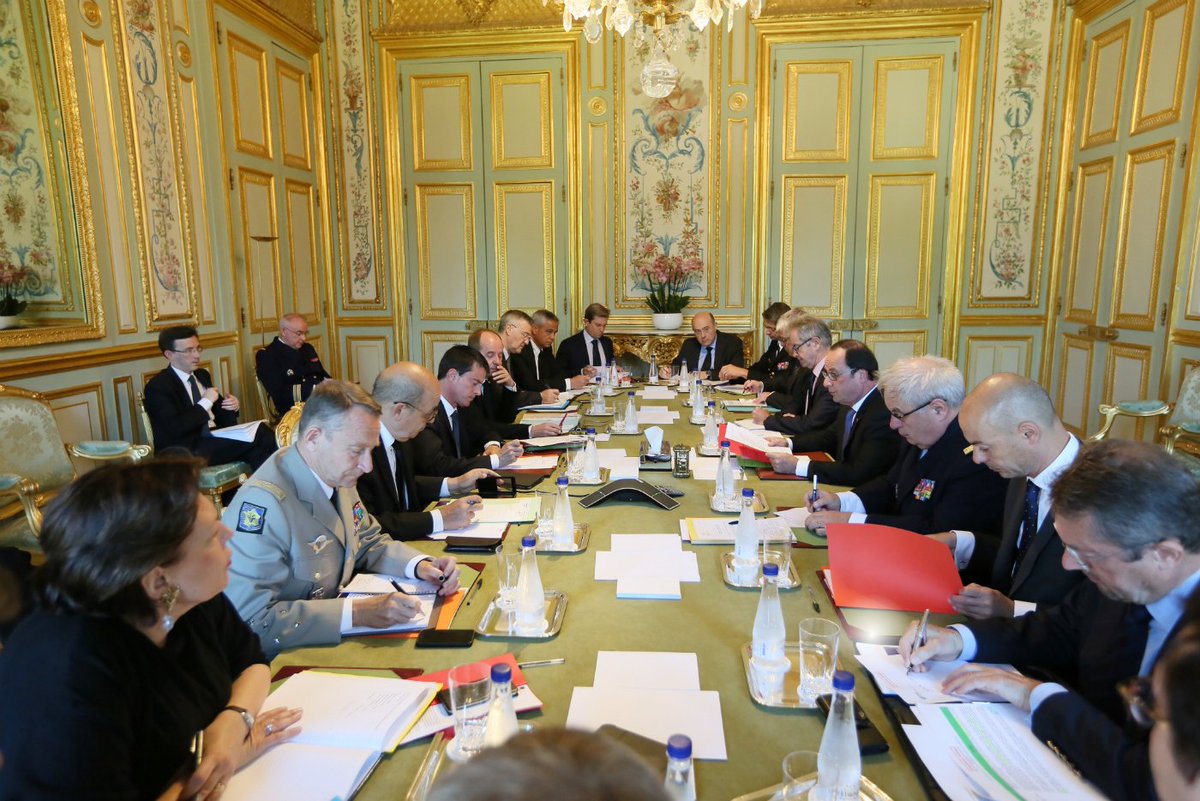 Francois Hollande just about managed to keep a straight face as the Egyptian orchestra did its thing.

A welcome boost to David Cameron's campaign for Britain to stay in the EU was actually an act of self-preservation by the French president.