Local farmers have donated food for the venture in Herefordshire.

Residents of a street in Hereford are being forced to shelter under umbrellas because of the huge amount of starlings flying overhead.

A farmer in Herefordshire has come to the aid of a struggling cattle farmer in Somerset after flooding forced him to evacuate his entire herd.

@dredgetherivers @westyeo our first load is on its way to Sedgemoor, I know it's not much but I hope it helps. http://t.co/59ZCKTonhG 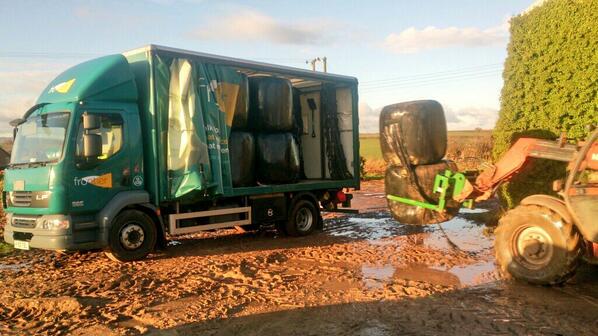 Ally Blair responded to a plea on Twitter from farmer James Winslade for donations of hay bales after floodwater destroyed tonnes of food on his Somerset farm.

Burglars stole an unusual but seasonal haul when they made off with eight oven-ready turkeys from a farm. Thieves took birds, worth around £800, from a large chiller at a farm in Ocle Pychard, Herefordshire.

The rural property lies off the A417 between Leominster and Newtown crossroads.

A police spokesman said: "The eight turkeys that have been stolen were each packed in their own individual box ready for cooking at Christmas.

"The turkeys were all 'Kelly Bronze' birds and each box was labelled with this name.

"Six of the turkeys weighed 8kg and the other two weighed 9kg. The total value of the stolen turkeys is thought to be as much as £800."

West Mercia Police said the incident happened between midnight on Saturday and 6am yesterday.

Network Rail has been fined £450,000 for breaching health and safety rules which led to the death of a woman at a level-crossing in Herefordshire.

A signalman was also fined for his role in the accident which killed Jane Harding. Today a judge said the incident was entirely preventable. Charlotte Grant reports.

The sentencing of Network Rail and one of its signalmen will take place today, after being found guilty of breaching health and safety laws, following the death of a woman at a level crossing.

Fifty-two-year-old Jane Harding died in January 2010, when the car she was a passenger in was hit by a train in the village of Moreton-on-Lugg, Herefordshire.

Signalman Adrian Maund was found guilty of failing to take reasonable care for the safety of those using the crossing, following a trial at Birmingham Crown Court.

Network rail was also convicted of failing to ensure the safety of non-employees at the level crossing.

Maund, from Leominster, Herefordshire, and the 42-year-old's employer will be sentenced by Judge Melbourne Inman QC this afternoon.

To read more on this story visit ITV News Central.