The woman had just withdrawn $75,000 from a Texas bank before two assailants attempted to steal it from her.

The Mayor of Houston said he has "no regrets" over his decision not to evacuate residents before Hurricane Harvey made landfall.

With rescue services stretched to breaking point, volunteers are descending on the area in boats and working around the clock to save lives.

Thousands of people have required rescuing in and around Houston after dramatic flooding submerged many parts of the city.

Police said the "active shooter", reportedly a lawyer, had since been shot by officers and they were not seeking any other suspects.

A construction worker who escaped from a burning building in Texas has spoken about his ordeal.

The fire was so intense that it blistered his face and hands as he waited to be rescued from a balcony.

Video of him swinging onto a balcony below to escape the blaze has been viewed three million times on YouTube and been shown on television around the world.

"I really wanted a second swing but the flames were so intense I just had to drop," he said.

He escaped with only blisters on his face and his hands from the extreme heat coming from the burning building and returned to the work the following day.

A woman who witnessed a huge fire at an under-construction apartment block in Texas has filmed the remarkable escape and rescue of a man who was working in the building.

The worker was seen emerging onto a top-floor balcony of the complex as a fierce blaze burned behind him.

He then manages to swing down onto a ledge beneath him before a rescue team plucks him from the building on an extendible ladder.

He then has a second lucky escape as the ladder swings away from the construction seconds before a large section of burning panelling falls away.

Firefighters have begun to control the construction site fire in downtown Houston.

No injuries were reported in the blaze according to the Houston Fire Department but a large block was levelled and over seven stories were damaged.

Firefighters were dispatched to the scene along with nearly 200 personnel and fire officials mayor's office said.

The only person to be reportedly rescued from the Houston building fire was a construction worker, but just before firefighters could reach him he dangled off the side of the burning building to escape the flames.

No injuries were reported, according to the Houston Fire Department. 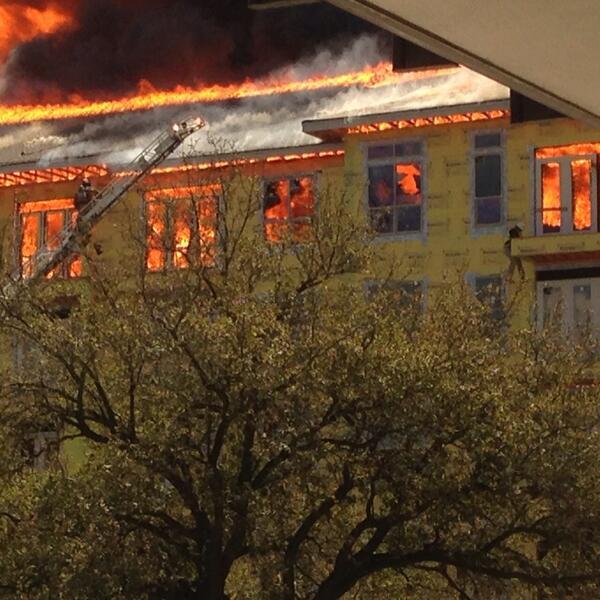 Lisa Cargile captured workers in her building watching the fire at a Houston apartment block - which is under construction - from a window at the Allen Center on Clay Street.

No injuries have been reported, according to the Houston Fire Department. One construction worker was rescued from the third floor.