Hampshire Police say a 33 year-old man has been arrested on suspicion of child abduction in connection with a teenager who went missing from Southampton.

The 15 year-old was found safe and well on the Isle of Wight yesterday night.

A 15-year-old schoolgirl is still missing two days after she was last seen with a man more than twice her age.

Police have said they are "growing concerned" for the welfare of Rebecca McLean, from Southampton, Hampshire.

The teenager is believed to have travelled to the Isle of Wight with 33-year-old Michael Britten, also from Southampton.

They were last seen together in Ryde, Isle of Wight, on Saturday morning.

Missing teenager Rebecca McLean from Southampton, has been found safe and well. Police say Rebecca was located on the Isle of Wight.

A 33 year old man is now helping police with their enquiries.

A police search is underway after a 15-year-old girl has gone missing from Southampton.

A photo has been released of Rebecca McLean , who is believed to be on the Isle of Wight with 33-year-old Michael Britten - also from Southampton.

The pair were last seen together in Ryde, Isle of Wight, yesterday morning and police are growing concerned for their welfare.

Anyone with any information, or who has seen Rebecca or Michael, is asked to contact Southampton police.

Portsmouth police have warned of delays for people hoping to travel to the Isle of Wight after a car deck collapsed on a ferry.

A spokesman said on Twitter: "Just liaised with Wightlinkferry (our side), there are delays for those wanting to travel tonight to the IOW due to the earlier incident."

A car deck fully loaded with vehicles has collapsed on a ferry on the Isle of Wight.

Four people have been taken to hospital after the incident at Wightlink's Fishbourne terminal, although none are believed to be in a life-threatening condition.

Paramedics, police and fire crews were called to the scene shortly before 10.30pm yesterday. 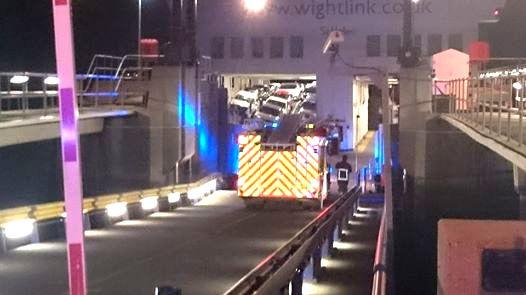 A photo obtained by OnTheWight news service showed a number of cars facing downwards on the collapsed deck.

The injured passengers were treated at St Mary's Hospital for a variety of injuries, but all were conscious and breathing, the Isle of Wight Ambulance Service said.

"It is very fortunate that it was only four people injured, all things considered," a spokesman added.

A 22-year-old woman who had acid thrown in her face is being treated in a specialist burns unit for "serious facial burns," police have said.

A 48-year-old woman has been arrested on suspicion of causing grievous bodily harm in the attack, which happened in Sandown on the Isle of Wight in the early hours of yesterday.

A spokeswoman for Hampshire Constabulary said, "Police believe this is an isolated incident and are not looking for anyone else in relation to this attack."

A 24-year-old woman, arrested on suspicion of assisting an offender, has been bailed until next week pending further inquiries.

The Met Office said gusts of wind have reached 99mph at Needles Old Battery on the Isle of Wight: