Judy Murray has hailed her son's "incredible" year after the double-Olympic champion was crowned world number one for the first time.

Judy Murray has tipped Ivan Lendl to restore the "poker face" that can guide Andy Murray to another Wimbledon title.

Men need a rule to allow them to take extra breaks during especially hot weather at Wimbledon, according to Andy Murray's mother Judy.

Currently, women are allowed to take 10-minute breaks if the heat reaches 30.1C - and Ms Murray is calling for the same privileges for men.

"Especially because they have to play best of five sets and a slam is such a tough thing to play," she said.

"I know you get a day between the matches but if you're going to win a slam you need to win seven matches in 13 days."

Judy Murray has praised her son's decision to hire a female coach as she warned there were not enough young girls playing tennis.

Read: Judy Murray recounts the horror of the Dunblane massacre

"It definitely shows that if you have the skills, the knowledge and there is a personality fit, there is absolutely no reason why women can't coach at the top end of any sport."

The captain of Britain's Fed Cup side - the international team competition for women tennis stars - also revealed her fears about the lack of young girls playing tennis.

She said: "The things that are trendy for kids to play with nowadays tend to be sedentary things, you sit and twiddle your thumbs or you watch something on a wide screen and that is just a fact of life."

Andy Murray's mother, Judy, has tweeted a picture of the Wimbledon winner and his elder brother Jamie from when they were kids, dressed in championship t-shirts: 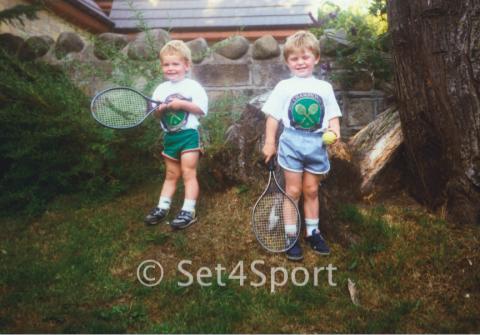 Judy Murray has been pictured serving coffee to fans waiting to get into Wimbledon ahead of day three of the championships.

Ms Murray, who was joined by Rafael Nadal's trainer and uncle, tweeted:

"Serving up the coffee to the Wimbledon queue with Manuel my Spanish waiter. Ok, so its Uncle Toni. #Lavazza".

Ms Murray, who recalled when she used to queue to get into Wimbledon, said fans deserve "nice coffee to wake them up after a long night of queuing".

When pressed on her sons chances of winning a maiden Wimbledon title, Murray insisted that the British number one refuses to get carried away and takes one match at a time.