It is considered to be the largest single gathering of people on the planet, as millions of worshippers gather around Islam's holiest site.

Muslims observing the Hajj pilgrimage to Mecca have been scammed out of thousands of pounds by con artists, police have warned.

Two British siblings injured in a crane collapse at the Grand Mosque in Mecca which killed 107 people have said it was like a horror film.

A father-of-four from Bolton was among the 107 people killed in Saudi Arabia when a crane collapsed onto the Grand Mosque in Mecca.

Tributes have been paid to Qasim Akram who was killed hours after arriving in the city ahead of his first pilgrimage to the holy city.

Mr Akram, who was believed to be 32 and a private hire driver, had been in the Grand Mosque with his parents some 50 yards ahead of them when the crane struck the mosque which is Islam's holiest site.

His parents, Mr and Mrs Mohammad Akram, are believed to have escaped without injury.

The annual hajj pilgrimage will go ahead despite a crane collapse which killed 107 people at Mecca's Grand Mosque, officials in Saudi Arabia have confirmed.

It comes after investigators revealed high winds and heavy rain had caused the collapse.

But while some parts of the Grand Mosque remained sealed off, in a show of determination crowds today returned to pray at the holy site ahead of hajj, one of the world's largest religious gatherings.

Hundreds of thousands of people have already arrived in Mecca for the annual pilgrimage, which last year drew two million people to the city.

Hajj is due to officially begin on September 21 - and an unnamed official told Saudi-owned Al Arabiya TV that it would go ahead as planned.

The incident won't affect the hajj pilgrimage this year and repairs to the damaged section [of the mosque] will begin within days.

The PM says his "thoughts and prayers" are with the families of those killed when a crane collapsed at the Grand Mosque in Mecca.

The number of people who died when a crane collapsed in Mecca's Grand Mosque has risen to 107, Saudi Arabian officials say.

Saudi Arabia's Civil Defence confirmed the death toll on twitter and said that the number injured in the incident has risen to 238.

An intense storm appears to be the cause of the crane collapse at Mecca's Grand Mosque, authorities in Saudi Arabia have said.

The country's civil defence authority said on Twitter that high winds caused the accident in which at least 87 people died and almost 200 were injured.

The Grand Mosque is Islam's holiest site and will welcome millions of pilgrims on the annual Hajj in two weeks time.

Earlier, amateur footage has apparently captured the moment the huge crane fell onto the Grand Mosque.

Amateur footage has apparently captured the moment a huge crane fell onto the Grand Mosque in Mecca, killing at least 87 people.

The video appears to show the crane toppling over onto Islam's holiest site in the midst of an intense storm. 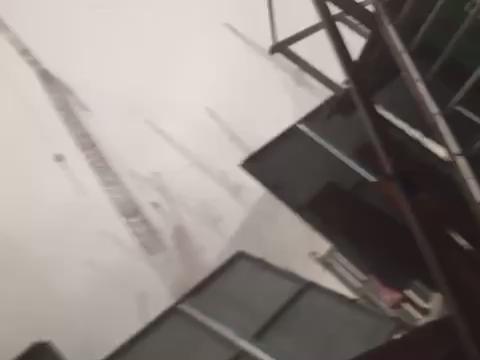 ITV News is working to verify this video.

The death toll following a crane collapse at the Grand Mosque in Mecca has risen to 87, authorities in Saudi Arabia say.

The Saudi Arabia civil defence authority boss also told Al Ikhbariya television that 183 people have been injured in the incident.

It is not yet known what caused the structure to fall, but eyewitnesses report high winds in the moments before the crane crashed down.