US surveillance powers - which allow the NSA to bulk collect phone data - have expired after the Senate failed to agree a fresh deal.

One person died and two people, including a police officer, were injured when a car tried to run through the National Security Agency's entrance gates near Washington.

Two men, who were dressed in women's clothing, tried to drive the 4x4 through the entrance gate at the NSA's Fort Meade, Maryland headquarters, officials said.

The vehicle crashed into a police car near the gate when officers opened fire to try and stop them. One of the men in the car died at the scene while a police officer was injured.

Their motive was not immediately known but officials said there was no evidence the incident was linked to terrorism. One official said investigators were looking into whether drugs were involved.

In a statement, the FBI said: "The shooting scene is contained and we do not believe it is related to terrorism."

One person was killed and another injured when they tried to drive a vehicle into the National Security Agency at Fort Meade, Maryland, the military installation said in a statement.

"NSA security personnel prevented them from gaining access to the installation," the statement said.

The incident is not believed to have been linked to terrorism.

Fort Meade's garrison commander Colonel Brian Foley said: "The incident has been contained and is under investigation."

At least one person is reported to have died in a firefight that erupted after a car tried to ram a National Security Agency (NSA) gate at an army installation.

A FBI spokesperon said the incident is not believed to have been linked to terrorism.

Two federal officials said at least one of the people in the car died after the firefight ensued.

Police in Washington told NBC News that a shooting incident occurred outside the NSA's headquarters in Fort Meade after two men dressed as women attempted to enter the facility.

A US intelligence official told NBC there was no indication it was a terrorist event and is being treated as a "local criminal matter."

It is not clear why the two men were trying to enter, and early reports indicate that one of the disguised men was shot.

A subsequent search of the cars revealed a gun and some drugs, according to reports.

Police are on the scene of the NSA's headquarters in Fort Meade after reports of a shooting.

NBC Washington is reporting that an investigation is underway and that emergency workers were seen caring for an injured uniformed man. 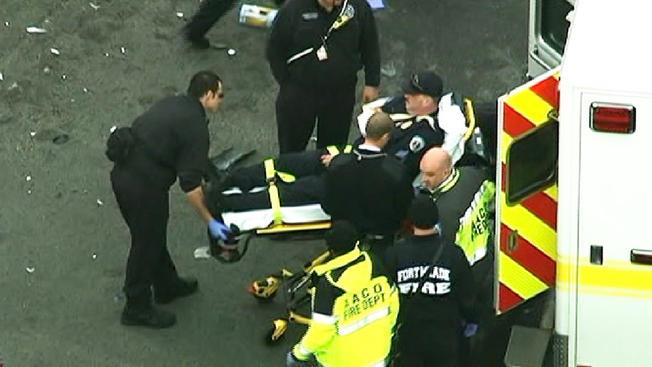 Fort Meade is home to approximately 11,000 military personnel along with about 29,000 civilian employees, NBC reports.

The National Security Agency (NAS) have denied that they were aware of the Heratbleed bug before the security flaw was made public.

The Federal government relies on OpenSSL to protect the privacy of users of government websites and other online services.

If the Federal government, including the intelligence community, had discovered this vulnerability prior to last week, it would have been disclosed to the community responsible for OpenSSL.

The denial follows claims the NSA had known about the flaw for up to two years.

The US National Secutiry Agency (NSA) has knew about the Heartbleed bug for at least two years before it was revealed, according to Bloomberg.

One person 'familiar with the matter' told the news agency that the NSA preferred to keep the bug secret in order to harvest the private data the flaw exposed.

UK intelligence agency GCHQ "intercepted and stored" the webcam images of internet users who were not suspected of any wrongdoing, the Guardian claimed, citing secret documents.

Files dated between 2008 and 2010 allegedly show a monitoring programme, known as "Optic Nerve", stored still images from Yahoo webcam chats and saved them to agency databases with the help of its US counterpart the National Security Agency.

GCHQ has consistently said its activities are necessary and "carried out in accordance with a strict legal and policy framework”.

The official Angry Birds website was defaced by hackers following a leaked National Security Agency document that claimed US and British spy agencies gain access to personal data from the mobile app.

Users trying to access the website late on Tuesday evening were met with an image of one of the Angry Bird characters with an NSA logo and the text "Spying Birds".

"Rovio Entertainment Ltd, which is headquartered in Finland, does not share data, collaborate or collude with any government spy agencies such as NSA or GCHQ anywhere in the world," the firm said in a statement.

“Our fans’ trust is the most important thing for us and we take privacy extremely seriously," said Mikael Hed, CEO of Rovio Entertainment.

"As the alleged surveillance might be happening through third party advertising networks, the most important conversation to be had is how to ensure user privacy is protected," he said.

The Syrian Electronic Army (SEA), known for hacking the New York Times last year, claims an associated group was responsible for the hack.

"A friend hacked and defaced @Angrybirds website after reports confirms its spying on people. The attack was by 'Anti-NSA' Hacker," the SEA tweeted, adding "He sent an email to our official email with the link of the hacked website."