Petr Cech has earned plaudits for his performance in ice hockey, but not every high profile sporting change has led to glory.

The former Chelsea goalie was named man of the match following his ice hockey debut for Guildford Phoenix.

Petr Cech has returned "home" to Chelsea as technical and performance advisor, a role bridging the board and coaching staff.

Petr Cech is adamant Arsenal will keep their feet on the ground in Thursday's Europa League semi-final second-leg clash with Valencia.

The Gunners slumped to a 1-0 defeat away in Belarus, with Alexandre Lacazette sent off late in the contest

In a statement published on Twitter, Arsenal goalkeeper Petr Cech announced his plans to retire from professional football at the end of the 2018/19 season, saying:

"This is my 20th season as a professional player and it has been 20 years since I signed my first professional contract, so it feels like the right time to announce that I will retire at the end of this season.

Having played 15 years in the Premier League, and won every single trophy possible, I feel like I have achieved everything I set out to achieve.

I will continue to work hard at Arsenal to hopefully win one more trophy this season, then I am looking forward to seeing what life holds for me off the pitch." 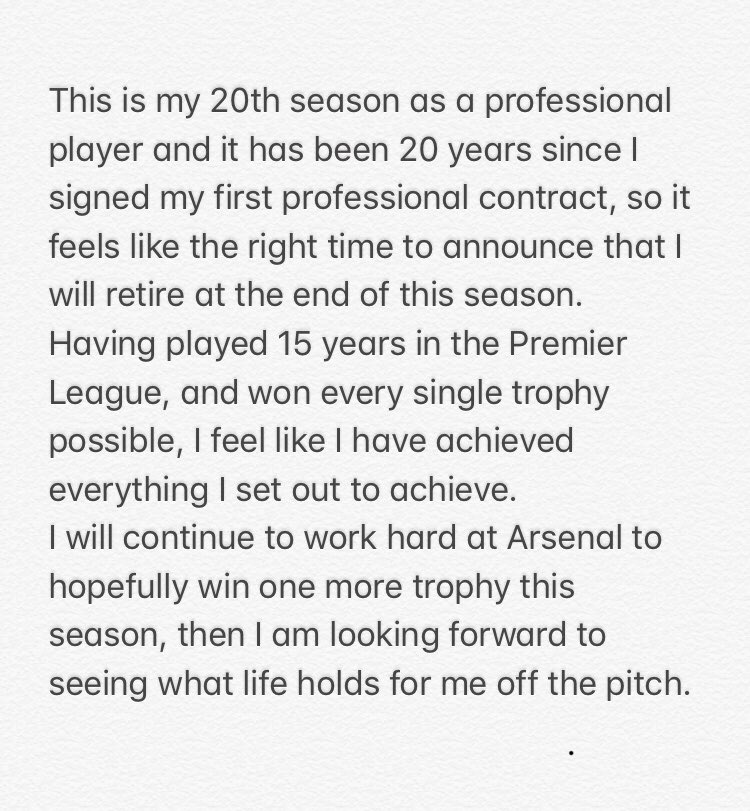 Goalkeeper Petr Cech will be sidelined for up to a month with a hamstring injury, Arsenal have announced.

Cech was replaced early in the second half of Saturday's Premier League match against Watford, with Bernd Leno coming on to keep a clean sheet as the Gunners won 2-0.

Arsenal said in an injury update on their official website ahead of the Europa League tie away to Qarabag in Baku on Thursday that Cech had a "left hamstring injury" and was "expected to return to full training in three to four weeks".

Unai Emery admits he has been surprised by the criticism aimed at Petr Cech in recent weeks as the Arsenal goalkeeper put in a man of the match performance in Sunday's Premier League win over Everton.

Cech, 36, has captained Arsenal in all of their Premier League games since Emery took charge but has not been without his critics as he adapts to playing the ball out from the back.

He has kept summer signing Bernd Leno on the bench - except for Thursday's Europa League win over Vorskla Poltava - and Emery is pleased with his goalkeeping options.

"I'm a little surprised because there have been a lot of questions over Cech," Emery said after the win.

"In pre-season and also in the first (league) matches with us, he's played with good performances. Bernd Leno will also improve with us and learn about this competition here.

"Petr has big experience and big quality. He's started the season very well and we think he's giving us the performance we want. Today he showed us that he's very good and continuing to work hard with this spirit every day."

Unai Emery insists Arsenal will continue "showing their personality" by asking Petr Cech to play out from the back.

Arsenal claimed only their second Premier League away win of 2018 - and their first under Emery - by edging a five-goal thriller at Cardiff.

Newly-promoted Cardiff scored their first league goals of the season as Arsenal demonstrated defensive vulnerability, and the Bluebirds might have taken an early lead when Cech was put under pressure and kicked the ball straight to Harry Arter.

But Emery defended Cech after the 3-2 win, saying: "He has experience and he is intelligent.

"He is doing what we want, to build up our job on the pitch. If you are playing long balls all the time, you are not showing your personality.

"It is clear you can do one mistake in one action, but we need to continue doing this.

"When you take a little risk it helps to create space and to attack."

However, France striker Alexandre Lacazette, starting for the first time under Emery, came up with a rasping winner nine minutes from time.