In an historic vote, MPS will decide for the first time on Thursday whether or not to remove a knighthood from a member of the public.

The Oxford Street branch is one of 58 stores closing by August 20.

The billionaire was contacted by ITV News while holidaying on his yacht in Greece, but refused to comment on the BHS situation.

Sir Philip Green said he is "sad and sorry for all the BHS people caught up in this horrid story".

More than 11,000 BHS workers will be told they face redundancy consultation today.

Parliamentary inquiry into the retailer's role in BHS's failure is a damning indictment of an entrepreneur who was trumpeted over the years.

Damning parliamentary inquiry accuses the retail magnate of seeking to blame anyone but himself for the collapse of BHS.

The retail mogul came armed with an apology, a Côte d'Azur suntan and enough front to moor a luxury yacht.

A statement released by MPs in the wake of Sir Philip Green's appearance before a committee panel today states that his evidence given flags "many further questions" for the former BHS boss.

The statement states: "We have many further questions for Sir Philip, particularly the big questions on the pension fund that he was unable to answer today."

It's not over yet. MPs statement flags "many further question" for Green and calls for access to Arcadia accounts https://t.co/fJEUaDa1Y2 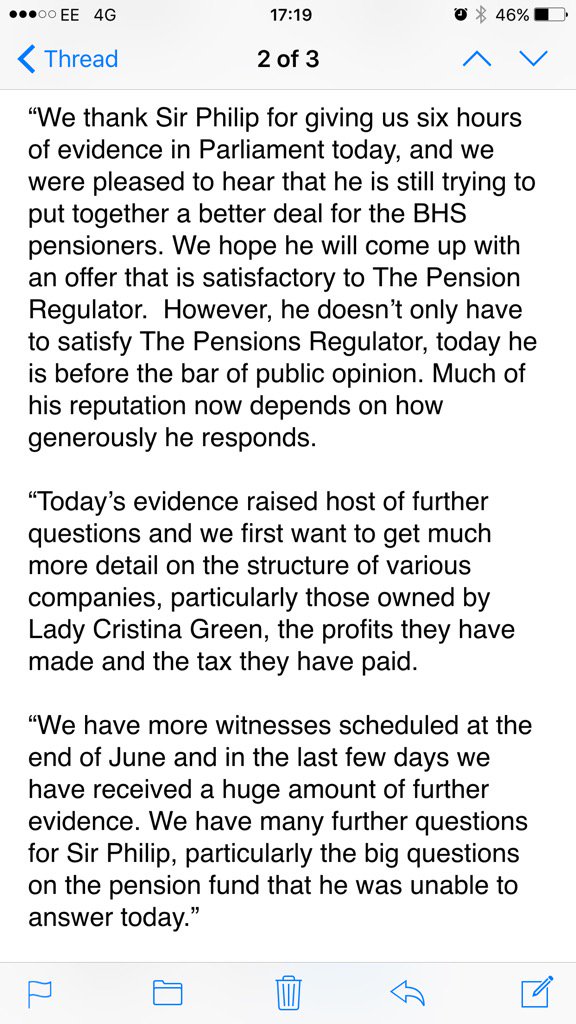 The Pensions Regulator (TPR) has denied implications it previously refused to engage with former BHS boss Sir Philip Green, after the businessman read out a letter from a pension trustee during a committee meeting saying "there have been talks on a solution, then "brick wall" of regulator".

The TPR said "it is not true to say we are refusing to engage with Sir Philip Green" and "our door is always open".

It is not true to say we are refusing to engage with Sir Philip Green, or his advisers, regarding the BHS pension scheme.

Our door is always open to discuss credible proposals and we have made initial contact with Sir Philip’s advisers to remind them of this point following comments that we have not engaged with them. We cannot comment further at this stage.

We will consider any credible and reasonable proposals that are put to us but we have not received details of any new proposal from Sir Philip Green or his advisers.