A Championship footballer has hit the big time after winning a millionaire lottery raffle back home in Ireland.

Kevin O'Connor, 22, who signed for Preston last year, returned for a few days with family and friends over the New Year after he learned of his big win.

After collecting his million euro jackpot in the National Lottery offices in Dublin he revealed that his mother Breda urged him to check his ticket after hearing the winning numbers were sold locally.

"After some searching, I sent them a picture of the ticket but I never really believed that it was the winner of the one million euro prize," he said.

"We had a game with Middlesbrough on Monday night so I completely put it to the back of my head until after the final whistle."

Police are treating the death as suspicious and a post-mortem examination is due to be carried out.

The English Defence League (EDL) will hold a rally in Preston today, with a counter demonstration also planned in the city.

In publicity for the rally the EDL said that Preston, which has a large Asian population, is "another creeping Sharia city".

It is the group's first rally of the year and the numbers expected at the march are not known.

A heavy police presence is expected in the city centre where both events are taking place.

Both groups have been warned of arrest under the Public Order Act if those attending either event leaves the designated areas for their demonstrations.

The right to peacefully protest is a sign of a healthy democracy and we have a collective duty with our partners to facilitate that, but we will not tolerate any law-breaking.

Preston is proud to be a diverse and understanding city where people respect each other and get on well, and we are asking people to bear that in mind if they are planning to demonstrate.

Our role is about fair and balanced policing - we're here to keep the peace, treat people with respect and dignity and uphold the law.

Liam Hewitson, 22, died from his injuries after he was attacked by his dog Trigger while alone at his home in Preston.

A 22-year-old man, named on a Facebook tribute page as Liam Hewitson, has died after he was attacked by a dog in Preston, Lancashire, police said.

Officers say he was treated by paramedics but died of his injuries earlier today.

The dog, which apparently to belong to Mr Hewitson, has been put down by vets. Police haven't yet revealed the breed of dog.

Groups of youths left bunches of flowers at the scene.

One young man, who said he was the victim's cousin, said "he had an epileptic fit".

Two bouquets of flowers had been tied to a nearby lamppost as police cars lined the street.

Detective Inspector Jane Webb, from Preston CID said: "This is a tragic incident in which a man has sadly died.

"Enquiries are on-going to establish the exact circumstances and my thoughts very much remain with his family who are being supported by specially trained officers at this time."

A 99-year-old dementia sufferer was dropped into a scalding hot bath by a care worker who had been in a "bad mood", a jury has been told.

Chesterfield and Preston have both been charged by the FA for failing to ensure their players conducted themselves in an orderly fashion.

Preston North End fans said an emotional farewell to Sir Tom Finney this afternoon as thousands gathered in the stands at the club's stadium to watch his funeral service.

The ceremony was broadcast live to Deepdale from Preston Minster, where hundreds of guests - including some of British football's great and good - united to pay their respects. 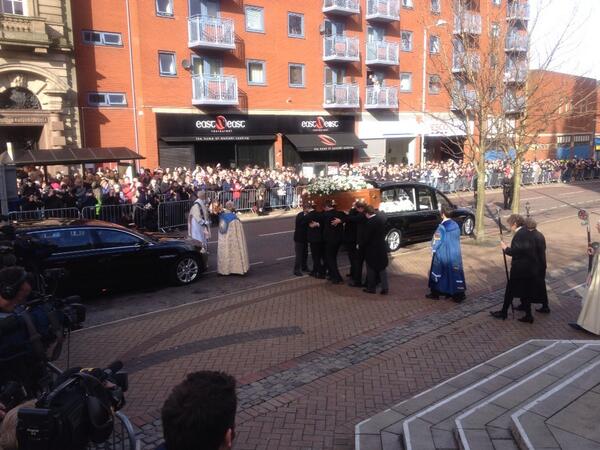