Esther McVey said she thinks it is "great news people are talking about powerful women" in Number 10 after a Daily Mail headline on "the battle of the Downing Street catwalk" was widely criticised.

Read: Esther McStay - why has she missed out on a promotion again?

Deputy Prime Minister Nick Clegg poked fun at the newspaper by tweeting a picture of what he was wearing, while Green MP Caroline Lucas said the headline was an "all time low".

However, the employment minister, who was promoted to attend Cabinet meetings in yesterday's reshuffle, said: "I think it's great news that people are talking about powerful women walking up in to Downing Street.

"You've got some great women there now, secretaries of state, new people who've just come in to Parliament."

"So, you know what? If it takes a photo of some women getting a new job to start a whole generation of new young girls talking about what jobs I can do then that's fine by me," she added.

David Cameron has been questioned on the percentage of women in his Cabinet during Prime Minister's Questions.

Given his commitment to equality, will the Prime Minister explain why 75% of his cabinet are still men.

PMQs today was a pretty clear win for David Cameron. Ed Miliband really needs to find a way to energise and motivate his troops.

Deputy Prime Minister Nick Clegg has poked fun at the Daily Mail by posting a photo on Twitter of what he is wearing today.

What I wore to the office today. Fingers crossed the Mail approves. Hope I don't look too '80s cabin attendant'. http://t.co/bVy7wCkfrG 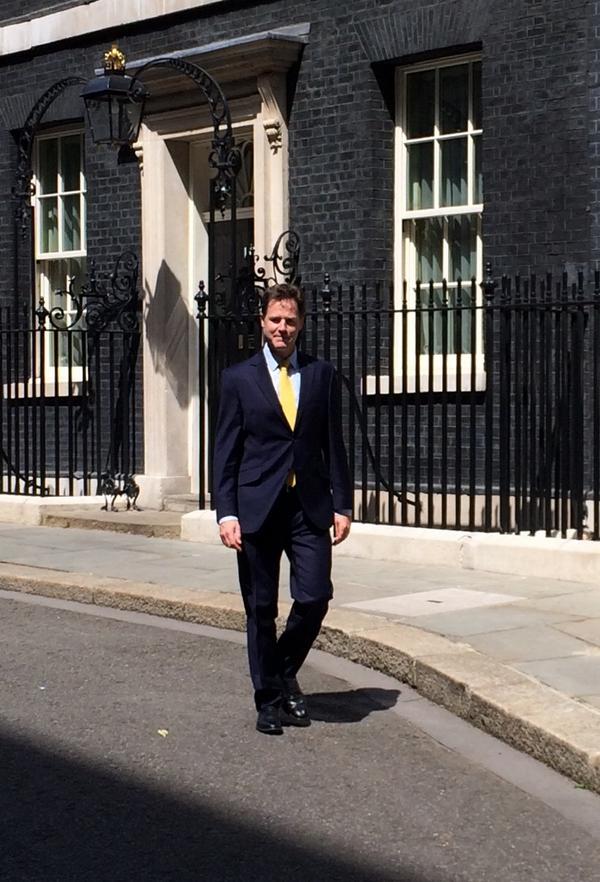 Mr Clegg said he hoped his attire wasn't too "80s cabin attendant" after the Mail did an article on what promoted female MPs were wearing.

The Mail websiteis well known for commenting on what celebrities and public figures are wearing.

Ed Miliband has spoken out about the Cabinet reshuffle during Prime Minister's Questions.

We have always said we would support the Government when they do the right thing so can I join thousands of parents across the country in congratulating him [David Cameron] on getting rid of the Education Secretary.

Deputy Prime Minister Nick Clegg said Britain will remain "anchored in the heart of European Union" under the coalition Government as he rejected claims yesterday's reshuffle created a Eurosceptic Cabinet.

The Liberal Democrat leader said: "The Conservatives are talking to each other rather than to the country or even to the rest of Europe about Europe.

"What I want to see is a reformed European Union - more competitive, more open, less bureaucratic, more open trade - but with Britain always leading in Europe.

"If the Conservatives want to constantly change their own policy or stance on the way they talk about Europe, that is up to them.

"This Government, a coalition Government because of the Liberal Democrats in it, will remain anchored in the centre ground with Britain anchored firmly in the heart of the European Union."

The new defence secretary said he "hoped" there would not be further cuts to his department's budget and praised his predecessor for "taking some very tough decisions" in order to get funding "under control".

Michael Fallon told Good Morning Britain the Ministry of Defence was able to "invest in the future" because Philip Hammond - the new Foreign Secretary - had "spent nearly four years" working on the department's budget.

Former Home Secretary Jacqui Smith has hit out at the coverage of what female ministers were wearing during the Cabinet reshuffle.

Smith, who was Britain's first female Home Secretary, told Good Morning Britain that focusing on the way female ministers dressed was "a bit frustrating" and warned it could put off young women from entering politics.

The new defence secretary "hopes" there will be no further cuts to his department's budget and praised him predecessor for "taking some very tough decisions" in order to get funding "under control".

Michael Fallon told Good Morning Britain the MoD was able to "invest in the future" because Philip Hammond had "spent nearly four years" working on the armed forces budget.

Prime Minister David Cameron has said his new Cabinet "has the ability to take this country forward."

Mr Cameron is expected to finalise the lower ranks of government this morning, before taking questions in the Commons.

He said: "This is a fresh team with the ideas, the energy, the policy and the ability to take this country forward, to complete the long-term economic plan and secure our future.

More: Cabinet reshuffle: Hammond in for Hague as Foreign Secretary