Popstar Rihanna tweeted a series of pictures of her with German players Lukas Podolski, Bastian Schweinsteiger and the scorer of the World Cup winning goal Mario Gotze after last night's final.

The singer, who was born in Barbados, posed with the trophy and tweeted: "They brought me the cup!!! I love these guys!!!" 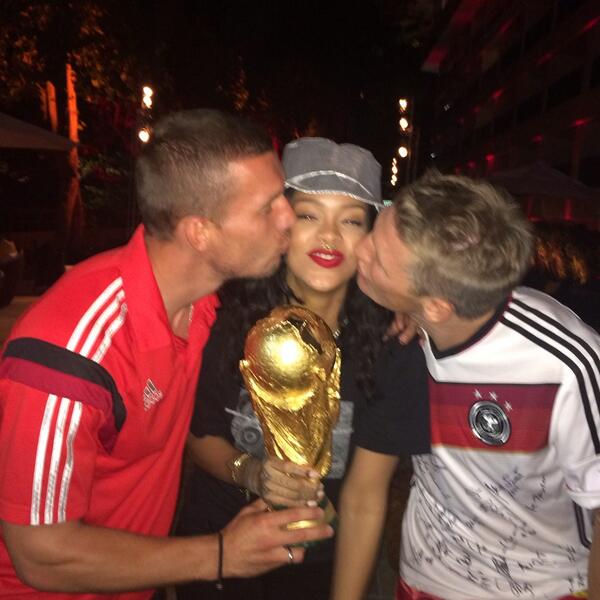 The shooter aka My hitta #Gotze #Champions http://t.co/bOxV5yIyj1 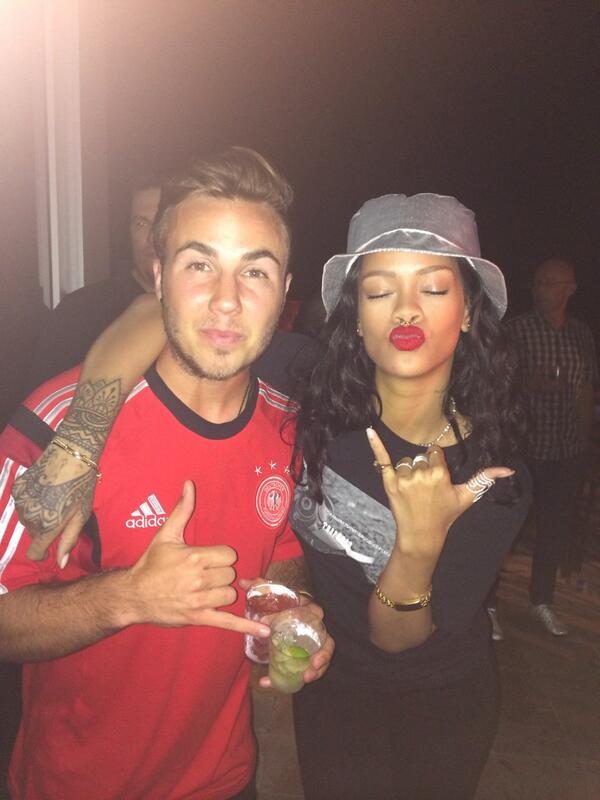 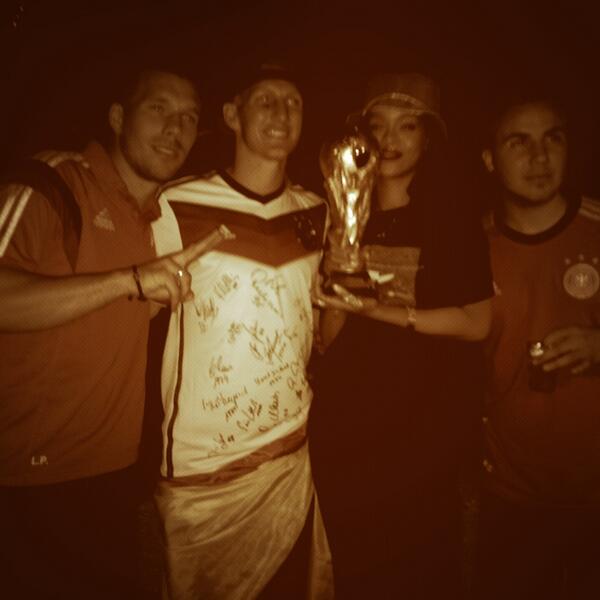 A Los Angeles judge on has ordered R&B singer Chris Brown to stay in jail at least until a probation violation hearing next month after the judge expressed concern about his ability to stay out of trouble.

Brown, 24, was arrested last Friday when he was dismissed from a Malibu, California, rehabilitation facility, triggering a violation of the singer's court-ordered treatment related to his 2009 assault of his then-girlfriend, the singer Rihanna.

The singer's probation violation hearing is scheduled for April 23 and is complicated by a misdemeanor assault case he faces in Washington, D.C. on April 17.

Singer Chris Brown has been arrested for a probation violation related to a 2009 case for "assault with a deadly weapon and criminal threats".

Brown, 24, who is pictured here in a hearing in December last year, is being held without bail in Los Angeles after being taken into custody, according to LA County deputy sheriff Amber Smith.

She said: "Los Angeles County sheriffs from the Malibu, Lost Hills station arrested Chris Brown at a location that he was staying at in the city of Malibu fora warrant that was issued for a probation violation.

"The warrant was related to a 2009 case for assault with a deadly weapon and criminal threats."

Singer Chris Brown, 24, was held without bail in Los Angeles after being taken into custody in Malibu at 2 m local time PDT (9pm GMT).

The singer was ordered into custody by Los Angeles County Superior Court Judge James Brandlin after the judge was notified that Brown was not following his probation and had been discharged from a Malibu rehabilitation center where he was ordered to stay, a court spokeswoman said.

The singer, who also faces a misdemeanor assault case in Washington, D.C., had been in the rehabilitation center for anger management as part of his court-ordered probation.

R&B singer Chris Brown was arrested on Friday in Malibu, California, on a warrant issued for a probation violation related to his 2009 assault of then-girlfriend Rihanna, the Los Angeles County Sheriff said.

Rihanna’s next project is a concept album for the upcoming DreamWorks Animation movie Home, Variety has reported.

The Diamonds singer will also be the voice behind the movie’s lead character Gratuity Tucci, with Jenifer Lopez, Steve Martin and Jim Parsons among the supporting cast.

Home, which is based on Adam Rex’s book The True Meaning of Smekday, follows Gratuity's journey to find her mother whilst she attempts to save the earth from an alien invasion.

The film is directed by Tim Johnson, who helmed DreamWorks' Antz and Over The Hedge, and is set for release on 26th November.

Explicit music videos should be made available to the public in a responsible age-appropriate way but should not be banned completely, Gennaro Castaldo of the British Recorded Music Industry told ITV News.

"We have been speaking to digital service providers about whether they could introduce age-based filters. That could be one way of solving this problem," Mr Castaldo said.

"Rather than trying to stop content by banning or censoring it, it’s about how to make it available in a responsible fashion."

Mr Castaldo said the industry takes the issue extremely seriously, but pointed out that "values move" on and that "back in the 50s, people were scandalised by Elvis Presley."

We have a look at five music videos that broadcasters judged as too shocking to show or play.

Pharrell and Robin Thicke's pre-watershed version of the "Blurred Lines" video also came under fire from the group for portraying women as "easy" and "having no self-respect".