Metropolitan Police Commissioner Sir Bernard Hogan-Howe has told ITV News that it was "pretty awful" to hear the findings of the report into Stephen Lawrence's murder investigation.

"As a professional police officer and then to see the reaction of Mr and Mrs Lawrence who were clearly distraught by what it had heard having lost their son so many years ago, at any level, human or professional, it is pretty awful to hear that list of terrible events," he said.

The head of the IPCC has apologised to the Lawrence family for the police watchdog's part in prolonging the "family's search for the truth".

The chair of the Independent Police Complaints Commission (IPCC) Dame Anne Owers said today that she has apologised to Baroness Doreen Lawrence and Neville Lawrence, parents of murdered teenager Stephen, for the police watchdog's part in prolonging the "family's search for the truth".

Commander Richard Walton has been temporarily moved from his post as Head of the Counter Terrorism Command, SO15, to a non-operational role, following the publication of the Ellison Report, Scotland Yard said today.

The Metropolitan Police said it had voluntarily referred the matter to the IPCC.

Duwayne Brooks has called on the Home Secretary to "remedy the wrongs" exposed by the Ellison review into the Stephen Lawrence murder investigation.

Brooks' solicitor Jane Deighton said the findings of the report could be the "basis for a series of legal actions against the police".

Mr Brooks, who was with Stephen Lawrence on the night he was murdered in 1993, said his attempts to move on from the trauma had been hampered by the way he was treated by the police and the manner in which the case was "mishandled".

However, the statement said it would make the situation "worse if it is Duwayne who has to take the initiative to get redress", claiming it should be the state to "remedy the wrongs".

Ms Deighton said Mr Brooks invited the Theresa May to "respond to us by setting out how the state could now start to put things right" during a meeting between the two.

Metropolitan Police Commissioner Bernard Hogan-Howe has said the publication of yesterday's Ellison Report was one of his "worst days" he has seen as a police officer.

The report concluded that evidence of police corruption had been found in the case of murdered black teenager Stephen Lawrence.

Mr Hoga-Howe told The Evening Standard: "This was a devastating report for the Metropolitan Police and one of the worst days that I have seen as a police officer.

“To see Neville and Doreen Lawrence struggling through their tears was awful. The Met has come to know them well and I have enormous respect for their quiet dignity and powerful determination to see justice, which I share.

“I cannot rewrite history and the events of the past but I do have a responsibility to ensure the trust and the confidence of the people of London in the Met now and in the future. This will need a considered response to meet head-on the concerns that have been expressed in yesterday’s report.”

Two men convicted of arson attacks on department stores will ask to have their convictions quashed in the first of a raft of cases that could be overturned due to the involvement of undercover police.

Lawyers for Andrew Clarke and Geoff Sheppard claim they were the victims of a miscarriage of justice when they were found guilty of firebombing branches of Debenhams.

They will renew attempts to get the convictions overturned after a damning report by Mark Ellison QC published yesterday found that information obtained by undercover officers had not been disclosed to defence teams and therefore miscarriages of justice may have occurred.

Former Metropolitan Police commissioner Lord Paul Condon said today "at no stage did I ever authorise, or encourage, or know about any action by any undercover officer" in relation to murdered Stephen Lawrence's family and friends.

David Cameron has said a public inquiry into the work of undercover policing will "make sure we get to the truth".

The inquiry was commissioned after a report into the police inquiry into the murder of Stephen Lawrence uncovered evidence of corruption.

The Prime Minister added: "It should have not taken this long and the Lawrence family have suffered far too much."

Several of today's papers lead with strong headlines after the report into the police inquiry into the murder of Stephen Lawrence uncovered evidence of corruption. 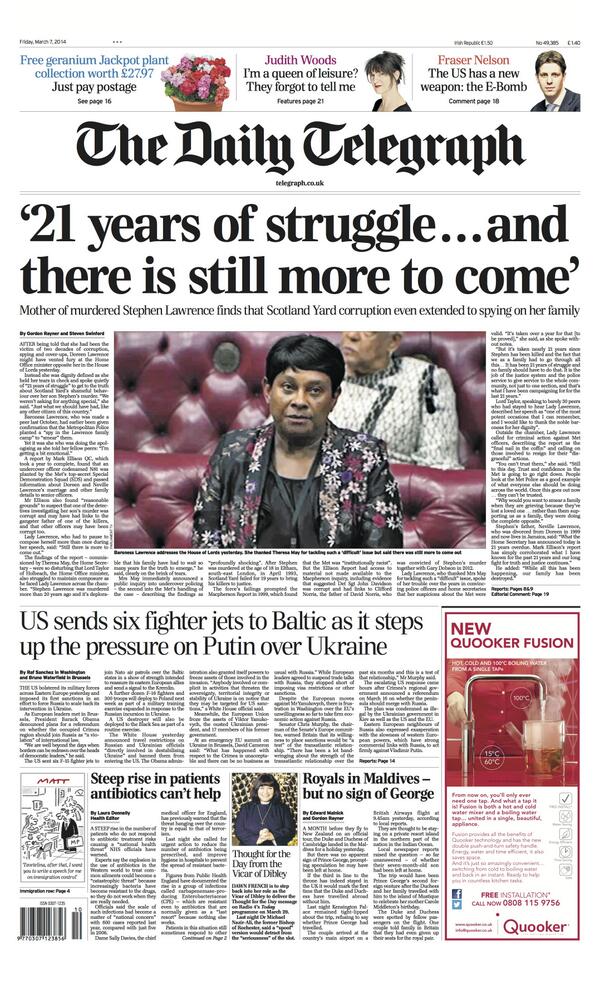 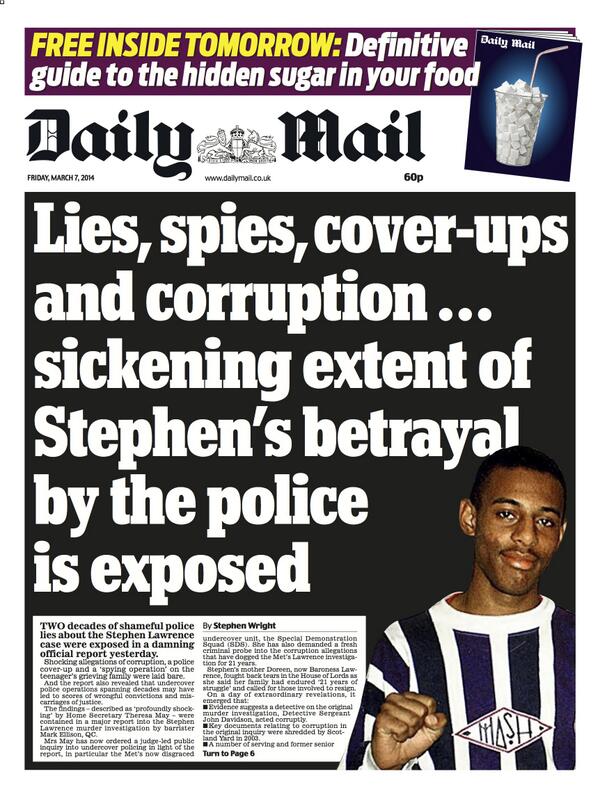 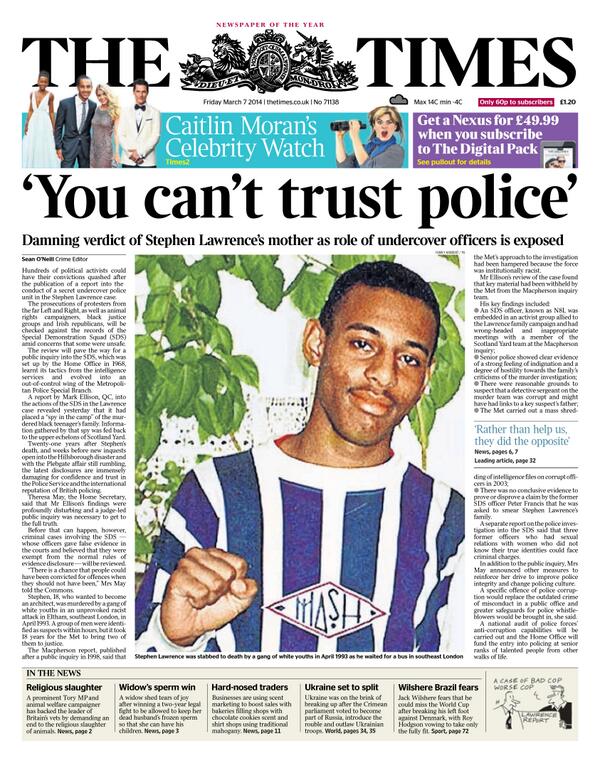 More: Neville Lawrence: Fight for justice 'still not over'

It was set up in the 1960s to infiltrate protest groups. One former member has claimed he had been told to find information to smear the Lawrence family.

ITV News correspondent Paul Davies has been looking into the background of the secret squad: