Foreign Secretary Philip Hammond has described the bombing of a refugee camp in north-west Syria as "horrifying."

Joining the international outcry, Mr Hammond said: "Reports of the bombing of a refugee camp in Samarda... are horrifying. The Assad regime's contempt for efforts to restore the cessation of hostilities in Syria is clear for all to see."

Earlier on Thursday, the Mariinsky orchestra from St Petersburg performed at the ancient city of Palmyra - an act Hammond called "tasteless."

"This attack [in Samarda] took place against the backdrop of a concert in Palmyra, a tasteless attempt to distract attention from the continued suffering of millions of Syrians. It shows that there are no depths to which the regime will not sink. It is time for those with influence over Assad to say enough is enough."

Washington has denounced the bombing of a refugee camp in Syria.

28 people were killed when air strikes hit a refugee camp in Idlib on Thursday. Authorities fear the toll could rise given the number of seriously wounded.

White House spokesman Josh Earnest said: "There is no justifiable excuse for carrying out an air strike against innocent civilians who have already once fled their homes to escape violence."

He added: "These individuals are in the most desperate situation imaginable, and there is no justification for carrying out military action that's targeting them."

The United Nations have led international condemnation of Wednesday's bombing of a Syrian refugee camp in Sarmada.

28 people, including women and children, were killed when air strikes hit a refugee camp near in the Idlib province.

"If this obscene attack is found to be a deliberate targeting of a civilian structure, it could amount to a war crime," he added.

The Syria Civil Defence, a volunteer search and rescue team, appeared to be the first to tweet from the scene:

More than 30 civilians killed in bombing of refugee camp in Idlib today. https://t.co/S1XYnO3f9w 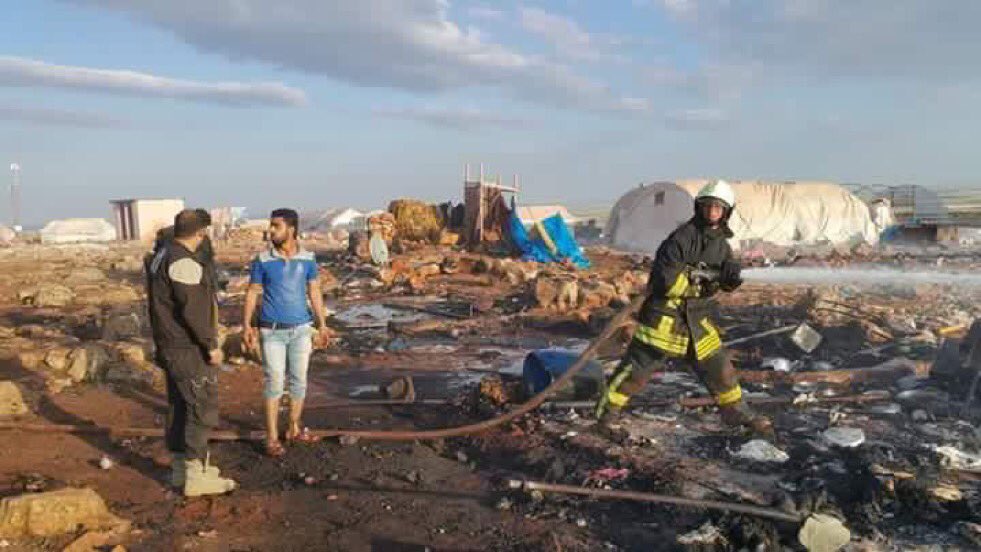 At least 28 are dead after an airstrike hit a refugee camp in Syria, according to the Syrian Observatory for Human Rights.

The number of dead at the camp near the Turkish border included women and children and is expected to rise because of the number of seriously injured people, the Observatory said.

The camp, near the rebel-held town of Sarmada in Idlib Province, was sheltering Syrians displaced by the civil war.

Fighting continues to rage in Sarmada, which is just 20 miles west of the city of Aleppo, despite a temporary deal to cease hostilities in the city being agreed yesterday.

The Islamic State militant group executed 1,878 people in six months according to the British-based monitoring group the Syrian Observatory for Human Rights.

The monitoring group said out of the number of people killed by IS, 116 were foreign fighters who had joined the militants but were caught trying to return home.

Rami Abdulrahman, the head of the Syrian monitoring group, told Reuters news agency that among the IS executions were 1,175 civilians, including eight women and four children.

Activists say at least 21 people have been killed in Daraa, southern Syria, after an explosion struck a vehicle travelling through Tel al-Juma at midnight last night.

The Syrian Observatory for Human Rights said four children and six women were among the dead. Activists in the area accused the military of planting a bomb.

Deraa was were the birthplace of the Syrian uprising against President Bashar Assad started in March 2011.

The family of a British man thought to have been killed in Syria have told ITV News they were shocked to know he had travelled there.

Syrian state television showed pictures of the British passport of 22-year-old Ali Al Manasfi and said he was shot by President Assad's forces.

ITV News understands Ali al-Manasfi disappeared from his London home 4 months ago and his family were so concerned they reported it the police.

It was then discovered he'd left the country and he later called his family a number of times from Syria.

They were shocked to discover he'd gone there. They described him as "big kid at heart."

It is believed that Ali Al Manasfi is the British man killed by forces loyal to President Bashir al-Assad.

ITV News believes the man shown on Syrian state television to be Ali Al-Manasfi. SANA TV in Syria have shown images of a British passport and claim that the man shown was among three Westerners killed by forces loyal to Basha al-Assad.