Paris St Germain have been hit with a partial stadium closure for their next European home match as a result of crowd incidents during their Champions League defeat to Real Madrid this month.

Uefa has ruled that the North Stand of the Parc des Princes must be closed for one match and PSG fined 43,000 euros (£37,000) after opening disciplinary charges against the French club following the last-16 second leg with holders Madrid.

Among the charges against PSG were the setting off of fireworks, the use of a laser pointer and the blocking of stairways during the match in Paris on March 6.

A Uefa statement on Thursday read: "The CEDB (control, ethics and disciplinary body) has decided to order the closure of the North Stand of the Paris St Germain Stadium during the next Uefa competition match in which Paris St Germain would play as the host club."

That punishment is not set to take effect until next season at the earliest, with PSG having been knocked out of the Champions League by Madrid 5-2 on aggregate.

Uefa has confirmed Samir Nasri's six-month ban for a violation of anti-doping regulations.

The 30-year-old former Arsenal and Manchester City midfielder's ban, which the player's legal representative revealed to Press Association Sport on Sunday, follows an investigation into an intravenous drip treatment he received at a Los Angeles clinic in December 2016.

European football's governing body, which opened disciplinary proceedings against the Frenchman on March 6 last year, said in a statement on Tuesday afternoon: "The player Samir Nasri has been found guilty for using a prohibited method in accordance with sub-section M2, par. 2 of the WADA (World Anti-Doping Agency) prohibited list.

"In this context, the CEDB (control, ethics and disciplinary body) has decided to suspend Samir Nasri for six months for violation of the World Anti-doping Code and the UEFA anti-doping regulations.

"This decision was taken on 22 February and is open to appeal."

England have been drawn to play Spain and Croatia in Group Four of League A in the UEFA Nations League.

England's Under-19 World Cup winner was visibly angry at the end of the Reds' 2-0 UEFA Youth League win at Prenton Park and had to be restrained by team-mates and coaching staff at the final whistle.

Liverpool confirmed they have "followed the proper procedure by reporting the alleged incident to UEFA" and Press Association Sport understands the incident is believed to relate to alleged racist abuse.

It is the second time this season Liverpool have been forced to act against the Russian club after Brewster's team-mate Bobby Adekanye was racially abused by fans during the game in Moscow in September.

Spartak were found guilty on that occasion and ordered to partially close their academy ground for one match.

Everton have been fined £26,600 by UEFA after a fan hit out at Lyon goalkeeper Anthony Lopes during their Europa League tie last month.

In shocking scenes at Goodison Park an Everton supporter, who was holding a child with one arm, appeared to try to strike Lopes in front of the Howard Kendall Gwladys Street End.

The incident happened after Toffees defender Ashley Williams barged into Lopes midway through the second half.

Everton were charged for "aggressions by supporters against players" and the UEFA control, ethics and disciplinary body on Wednesday announced the club have been fined 30,000 euros.

The Premier League club banned the supporter following the incident on October 19, during Everton's 2-1 defeat.

Merseyside Police launched an investigation and interviewed a 30-year-old man on suspicion of assault and affray before he was released under investigation.

The Everton fan - whose young child was sucking a dummy - appeared to push Lopes' head and seemed to aim a punch in the direction of the keeper and defender Mouctar Diakhaby.

Roma have been charged by UEFA after some of their supporters allegedly directed monkey chants at Chelsea defender Antonio Rudiger during Wednesday's Champions League clash at Stamford Bridge.

Germany defender Rudiger left Roma for Chelsea last summer, having previously expressed his frustration at a failure to tackle racist incidents which saw him targeted.

A statement from European football's governing body read: "Disciplinary proceedings have been opened following the UEFA Champions League group stage match between Chelsea FC and AS Roma (3-3), played on October 18 in England."

UEFA said the charge was "racist behaviour (monkey chants)", adding: "This case will be dealt with by the UEFA Control, Ethics and Disciplinary Body on November 16."

Eden Hazard scored twice as Chelsea battled to a 3-3 draw with Roma to stay top of Champions League Group C.

Chelsea were second best, but Hazard headed in Pedro's cross to give the Blues seven points ahead of the trip to the Eternal City on October 31. 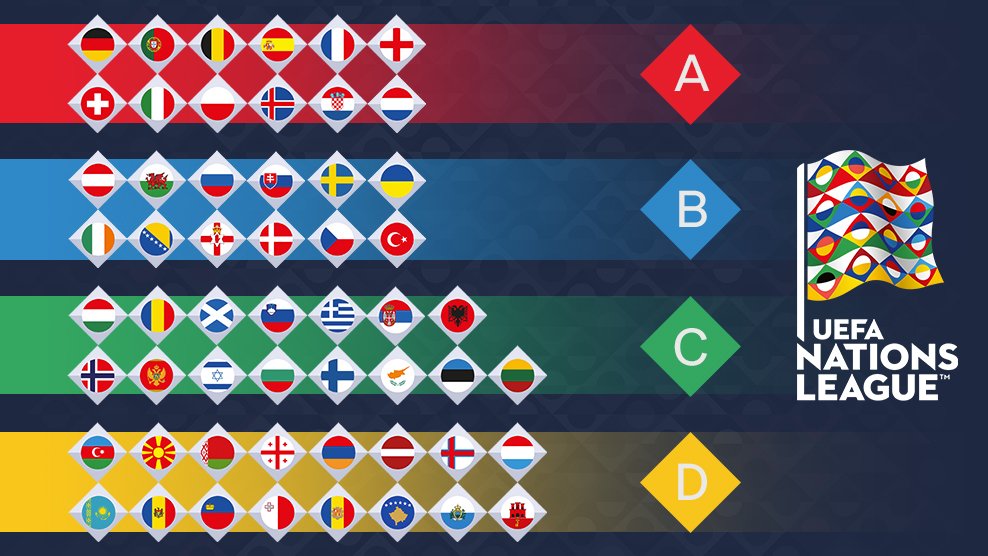 The new format for European Championship qualification has been announced by Uefa.

'The Nations League' sees the 55 European national teams placed into four pots with their position depending on their rankings. The top twelve teams automatically form League A.

England who progressed to the World Cup finals this month are in League A.

The Republic of Ireland are in League B alongside Northern Ireland and Wales who they defeated to progress to a World Cup play-off on Monday. Scotland are the lowest ranked of the home nations so they are in League C.

Uefa say the Nations League "creates more meaningful and competitive matches for teams and a dedicated calendar and structure for national team football".

The competition, which will begin in September 2018 and will create four qualifying places for Euro 2020.

Teams in the bottom 16 in the rankings - are now guaranteed one of the 24 qualifying places for the European Championship finals. There will also be promotion and relegation between divisions.

Each of the four leagues A, B, C and D will contain four groups of three or four teams, with these decided in a draw on next January.

Uefa has announced it has opened disciplinary proceedings against Arsenal and Cologne following crowd problems at their Europa League match.

Uefa has opened disciplinary proceedings against Celtic following the pitch invasion by a fan during the Champions League tie against Paris St Germain.

The supporter raced onto the Parkhead pitch late in the first half with the hosts 3-0 down and darted towards 18-year-old superstar Kylian Mbappe.

He aimed a fresh-air kick at the former Monaco striker but failed to make contact before being whisked away by stewards.

"The crowd reaction said it all. It is disappointing at any ground that a supporter gets on to the pitch," said the Cetic boss.

"I am sure the club will deal with that. It shouldn't be anything that we should see on a football field. The crowd in their reaction told you everything you need to know.''

Arsenal chief executive Ivan Gazidis has been appointed to UEFA's executive committee as one of two representatives from the European Club Association.

The ECA is the successor organisation to the G-14 group of Europe's most powerful clubs and now represents the interests of 220 clubs from 53 countries.

In an ECA statement, Agnelli said: "My predecessor, Karl-Heinz Rummenigge, has set a great example and has set the bar of achievements at a very high level.

"I am looking forward, together with the executive board and the administration, to build on his significant results as we manage ECA in the coming years.

"It is a huge honour and a great responsibility the European clubs have entrusted me with. I am looking forward to working closely with all stakeholders within the game in order to protect, promote and develop club football at all levels across Europe."

As well as finding a new leader, the ECA also elected 11 board members and named its four representatives to UEFA's professional football strategy council.

While these appointments are significant in terms of influence and prestige, perhaps the most interesting conversations at the ECA's 19th general congress in Geneva this week took place behind closed doors, as Bartomeu, Al-Khelaifi and others met to discuss their differences after a contentious transfer window.

Among the subjects discussed were the length of the transfer window, the future of UEFA's financial fair play rules and the next iteration of Europe's club competitions between 2021-24.

"It was agreed that further discussions will be held on these matters to develop an ECA position following which it will be shared and discussed with the relevant stakeholders of the professional game," the ECA added.