Unemployment fell by 77,000 between December and February to 2.24 million, official figures showed today. 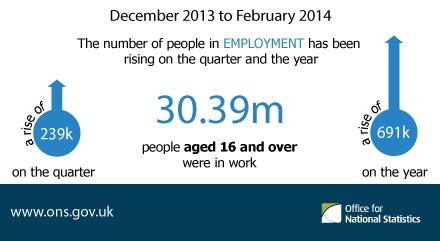 The number of people claiming Jobseeker's Allowance last month also fell by 30,400 to 1.14 million, said the Office for National Statistics.

Unemployment was 2.24m in Dec-Feb, down 77k on Sep-Nov http://t.co/AUdyClTFHu http://t.co/gXXJV4FiXl 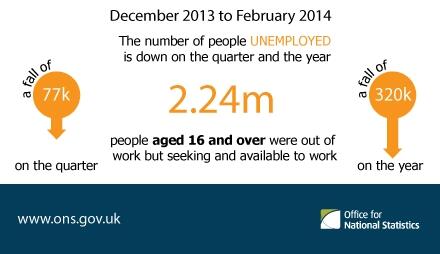 Average earnings increased by 1.7% in the year to February, above the CPI inflation rate of 1.6%.

The increase in earnings will be the first time in six years that the average wage has risen above the consumer price index (CPI), which stands at 1.6% for 2014.

Wages are expected to surpass inflation today for the first time in six years.

On Tuesday the Consumer Prices Index (CPI) rate dropped to a new four-year low of 1.6%.

ONS labour market statistics are expected to show that regular pay is rising at a rate of 1.8%, up from 1.3%.

Britain is fourth for the sharpest fall in wages in Europe - only Greece, Portugal and the Netherlands have suffered larger declines.

House of Commons library figures show there has been a 5.5% reduction in average hourly wages since mid-2010. It means British workers have felt the squeeze more than those in countries which have been rocked by the eurozone crisis.

Meanwhile, Bulgaria had the biggest increase of hourly wages at 13.2%. Also, Germany saw a 2.7% rise.

The value of UK workers' wages has suffered one of the sharpest falls in the European Union, House of Commons library figures have shown.

The 5.5% reduction in average hourly wages since mid-2010, adjusted for inflation, means British workers have felt the squeeze more than those in countries which have been rocked by the eurozone crisis.

Only the Greeks, Portuguese and Dutch have had a steeper decline, the analysis showed, while in Germany hourly wages rose by 2.7% over the same period and in France there was a 0.4% increase.

Across the EU as a whole the average fall in wages, adjusted for the European Central Bank' s harmonised index of consumer prices, was -0.7% and in the eurozone area it was -0.1%.

Bar and restaurant staff are among those least likely to earn a living wage:

The majority of service staff do not earn enough to afford a basic standard of living, according to a new study out today.

Four out of five waiters and waitresses, or 85% of service staff do not earn the living wage.

Almost three-quarters of people working as cleaners or florists do not earn the living wage, according to new research by accounting firm KPMG.