Newcastle United's head coach has said it has been a "tough period" for him and the team, but that he "never offered to resign" from his role.

Speaking at a press conference ahead of the team's match against West Bromwich Albion this weekend John Carver said, he's had a lot of support from other people within the game this week, but would not name names.

Carver also dismissed claims Fabricio Coloccini's open letter to fans was a PR stunt and showed journalists the original copy in Spanish to prove it: 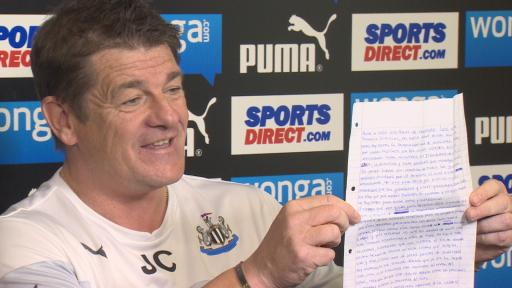 The Magpies are hoovering above the relegation zone having not picked up a point since the beginning of March.

After the team's eighth consecutive defeat away to Leicester, Carver accused defender Mike Williamson of getting sent off on purpose.

Regarding Williamson, Carver said he "had a good conversation with Mike". Details will remain private @itvfootball

Striker Papiss Cissé will be available to play on Saturday for the first time since his seven match ban for a spitting incident.