Making A Murderer defence lawyers Dean Strang and Jerry Buting are set to make an appearance at Belfast’s Mandela Hall to discuss justice and the Steven Avery case for which they are best known.

The pair will be participating in a moderated discussion about the systematic failures of the criminal justice system and the broader implications of the case central to Making A Murderer.

Wisconsin native Avery made headlines around the world when he was released from jail in 2003 – he had missed out on 18 years of his life after being wrongly convicted for rape.

He stood to potentially receive millions of dollars in compensation.

Then he was accused of murder.

Jerry Buting, who served as one of Avery’s defence lawyers alongside Dean Strang, previously visited Belfast to act as guest speaker at the European Young Bar Association conference back in April.

He spoke to UTV at that time about how Making A Murderer had been received.

Making A Murderer looks at Steve Avery’s family life in Manitowoc County, his previous wrongful conviction over the rape of Penny Beerntsen, and his trial over the killing of Teresa Halbach.

Opinion remains divided on whether he has once again been the unfortunate victim of a terrible miscarriage of justice, or whether he really did commit murder.

As his trial defence attorneys, Jerry Buting and Dean Strang arguably stole the show as they tried to take on prosecutor Ken Kratz who has widely been perceived as one of the ‘villains’ of the piece.

Even allowing for differences between US and UK law and the handling of court proceedings, the documentary shocked many viewers.

Calls continue to be made for issues like prejudicial press coverage, allegations of evidence tampering, and the handling of juveniles involved in the case, to be addressed.

While the defence lawyers were surprised by the attention they received, they were encouraged by the response from young people in particular who became more interested in the workings of the justice system as a result of Making A Murderer.

Now, those captivated by the Netflix documentary and the compelling case it outlined can hear directly from Dean Strang and Jerome Buting at their Belfast appearance on 27 September.

They will also be appearing at Vicar Street in Dublin on 23-24 September, while tickets for the Belfast date go on sale from Friday 22 July.

It comes as Netflix announced a second series of the hit documentary, looking at the post-conviction process and ongoing legal challenges of Steve Avery and his co-defendant Brendan Dassey. 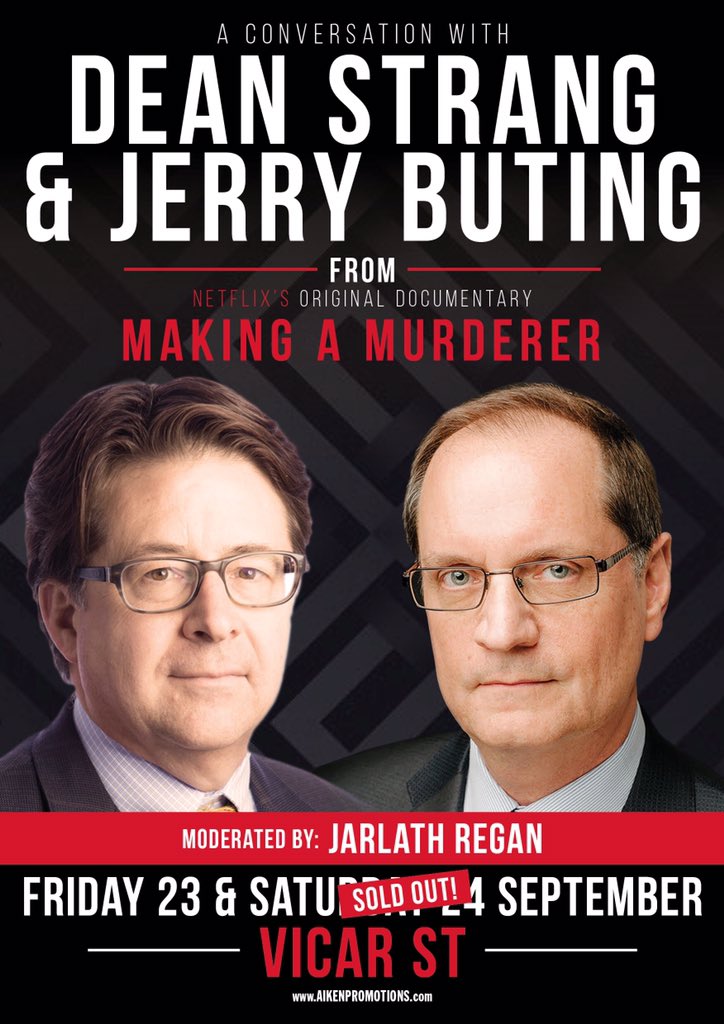