Guillaume Keke put the visitors into a 28th-minute lead and Kyle Cherry made it 2-0 a minute before the break.

Dungannon got back into contention through Andrew Burns, but despite having Joe McKinney sent off, the visitors held out for a crucial win.

4th place is our reward after tonight's fine win over Dungannon. https://t.co/07ajEWdrbA 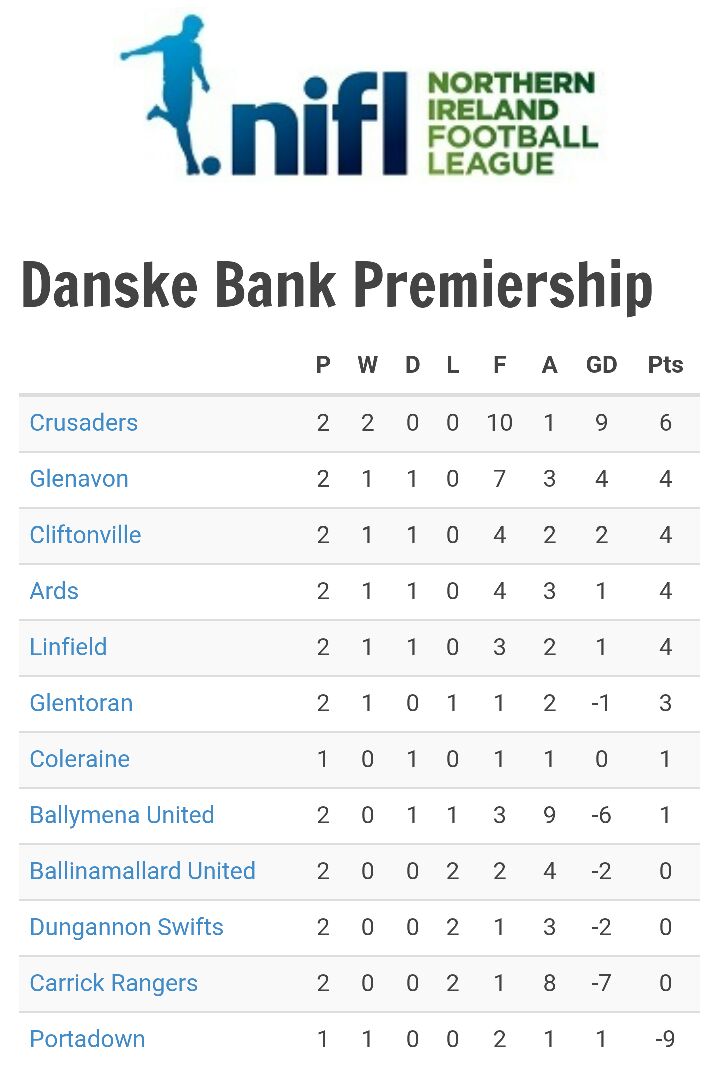 Portadown took the spoils 2-1 in a close encounter at Shamrock Park with Ballinamallard United.

A Garry Breen header gave Pat McGibbon's side the lead on 26 minutes, but United hit back on 51 minutes with Shane McGinty on target.

Mark McAllister edged Portadown ahead again on 68 minutes and despite late pressure from the visitors, they held out for the win.

Cliftonville recorded their first win of the season with a 2-0 victory over Glentoran at Solitude on Wednesday evening.

Chris Curran set the Reds on their way with the opening goal 11 minutes before the break.

Although there was only one goal in it for most of the game the Glens lacked any cutting edge and a late strike from David McDaid wrapped up a comfortable three points for the home side.

Kyle Owens is now only one goal behind his brother Jordan in the @officialnifl goal charts!

Glenavon produced a storming second half as they battled back from a three goal deficit to earn a point in a 3-3 thriller at Ballymena.

David Jeffrey's side seemed to be well on the way to a welcome win after that 6-0 hammering by Crusades at the weekend.

Kyle Owens put Ballymena ahead on 13 minutes, rising high to nod in a corner from Gary Thompson. It was Owens again on 38 minutes to make it 2-0 and when Cathair Friel put United 3-0 up just after the restart there seemed no way back for Glenavon.

However the visitors began the long haul back with Guy Bates scoring from the spot after Johnny Flynn had conceded the penalty with a foul on Greg Moorhouse.

Then Moorhouse grabbed his first goal for the Lurgan Blues with a well placed header from a Rhys Marshall delivery and it was game on.

Subs Gary Hamilton and Ciaran Martyn combined to find the equaliser, Hamilton's shot collected by Martyn and despite falling to the ground he had time to drill a low shot into the left hand corner of the net.

Ballymena will be kicking themselves for throwing away such a commanding lead, while Glenavon will be delighted with a point.

A goal two minutes from time from Aaron Burns salvaged a point for Linfield as they were held to a 1-1 draw at Windsor Park by Coleraine. It was tough on the Bannsiders who seemed to be on the way to victory following a superb strike by James McLaughlin.

Both teams had chances to take the lead in the first half. Mark Haughey went close for the Blues as he headed over and then Ian Parkhill rifled a shot wide of the Linfield goal.

Coleraine keeper Chris Johns produced a smart save to keep out a shot from Andy Waterworth and from the corner Chris Casement headed wide.

Brad Lyons had a great chance to give Coleraine the lead just before the break but after being teed up by Gary Twigg he lashed his shot over the target.

McLaughlin made the breakthrough on 49 minutes as he swept home a half volley from close in after a teasing cross from Rodney Brown bounced into his path.

The Blues struggled to find a way back but pressed to the end and were finally rewarded on 88 minutes when Burns found space to drill the ball home from Niall Quinn's corner.

Coleraine’s Lyndon Kane was sent off after being shown a second yellow card for dissent following the goal.

The drama continued right to the end with Jamie McGonigle denied a late winner for Coleraine as his effort hit the post.

Crusaders continued their superb start to the new season with an emphatic 4-1 win over Carrick Rangers at Taylor's Avenue on Wednesday.