The Greenvale hotel has agreed to temporarily restrict its events to weddings and private functions, a council committee has heard.

An elderly man has escaped injury after two wheelie bins were placed at the front door of a flat in Cookstown and set alight.

Three men and one woman have been released on police bail pending further enquiries into how a woman came to be injured in a house in Coalisland, Co Tyrone.

The men - aged 24, 25 and 34 – and the 29-year-old woman were arrested on Monday following the incident in the Mourne Crescent area.

The injured woman, who is in her 20s, remains in hospital.

Detectives are continuing to investigate the surrounding circumstances and are appealing for anyone who witnessed anything, or who knows anything, to contact them.

Michael Gallagher, whose son Aiden was killed in the 1998 Omagh bomb, has described the ruling of the European Court against two men found liable over the atrocity as “vindication” for the families.

A complaint by Michael McKevitt and Liam Campbell, who were previously ordered to pay £1.6m in damages to bereaved relatives, has been dismissed.

They had tried to claim that their trial was unfair – an allegation refuted by the European Court.

“We feel like we have been under siege since the first judgment, with appeal after appeal,” Mr Gallagher said, following Thursday’s verdict.

“We are relieved it is now over.”

The European Court made clear that its decision was final and Mr Gallagher has now said the authorities must held bereaved families recover the money owed to them.

Enormous expense has been paid by taxpayers to make sure these people got the best of British and European justice.

The British and Irish Governments must now make sure the interests of the victims comes first.

Mr Gallagher added: “It would be a very hollow judgment if it was only words.”

“These people value money and it’s where it can hurt them and both governments must work together to make sure the families receive the money that was awarded to them.”

Mr Gallagher also made it clear that the bereaved relatives would continue to campaign for a full cross-border inquiry into the Omagh bombing, amid persistent claims the outrage could have been prevented.

The European Court of Human Rights has found that the trial of two men found liable over the Omagh bomb in a civil case was not unfair.

While there has never been a criminal prosecution over the atrocity, Michael McKevitt and Liam Campbell were among the defendants in a civil case brought by families of the victims.

The action was successful, and they were ordered to pay substantial damages.

The pair then complained to the European Court that the trial had been unfair.

They claimed that the first instance court should have applied a criminal rather than civil standard of proof, due to the severity of the allegations against them.

They further claimed that the admission of the evidence of an FBI agent who had not been made available in court for questioning was unfair.

However, the European Court has now dismissed the complaints.

It found that a criminal standard of proof was not necessary because the proceedings had been for a civil claim for damages and there was no criminal charge.

It also found the judge had fully considered the need for appropriate safeguards regarding the absent FBI agent; that the defendants had had an adequate opportunity to challenge the agent’s evidence with their own; and that the judge had had due regard to the appropriate considerations when deciding what weight he could attach to the evidence of an absent witness.

The Omagh bomb detonated in the centre of the Co Tyrone town on the afternoon of 15 August 1998, killing 29 people - including a woman pregnant with twins.

McKevitt is currently jailed in Portlaoise, while Campbell is in HMP Maghaberry.

The Fire Service believe a fire started at the derelict Herdman's Mill at Sion Mills was started deliberately.

Co Tyrone woman Michaella McCollum has returned to Ireland three years after her arrest in Peru for smuggling cocaine.

Ryan Farquhar has been talking about his battle to get his life back on track after the horrific crash in which he nearly lost his life.

Northern Ireland's Kris Meeke has become the first British winner of Rally Finland as the Citroen driver set a new average speed record for the event.

The 37-year-old Dungannon man’s average speed of 126.60kph bettered Latvala's record set on the event a year ago by 1.2kph.

Meeke led almost the whole of the four-day race over the gravel roads in Finland in his Citroen DS 3.

His Abu Dhabi Total team-mate Irishman Craig Breen also had a maiden podium finish in third, claiming his first stage win on Sunday morning to finish one minute 41.3secs adrift of the winner.

Meeke has now climbed to ninth in the World Rally Championship standings and lies 92 points behind leader Sebastien Ogier.

Northern Ireland’s Kris Meeke is on course to secure his second World Rally Championship round after extending his lead at the end of day three at Rally Finland.

#WRC #RallyFinland SS20 An exceptional day.. 41sec lead. We have a job to do tomorrow. Will try and bring it home https://t.co/YXA9BW6H2v 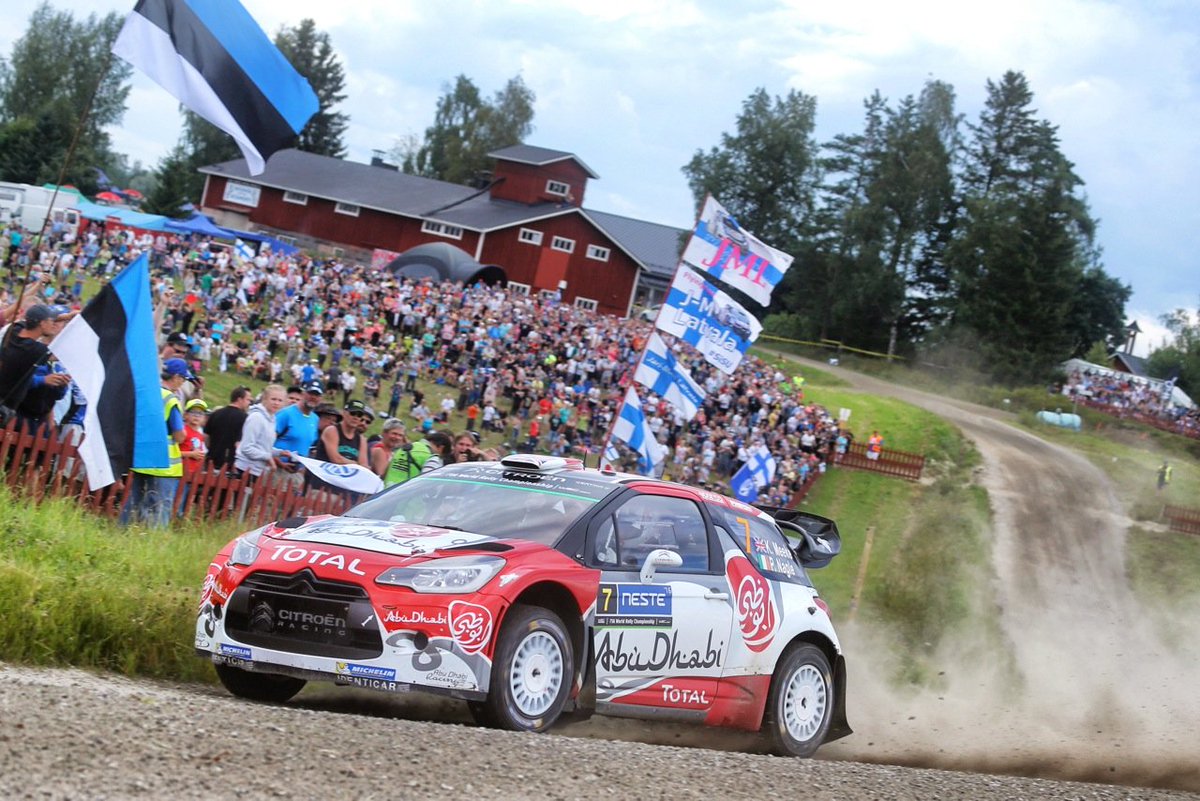 Northern Ireland’s Kris Meeke is on course to secure his second World Rally Championship round after extending his lead at the end of day three at Rally Finland.

The 37-year-old Dungannon man headed into Saturday with an 18.1 second advantage over Jari-Matti Latvala, but the Finnish driver struggled to keep up with the dominant Citroen DS3.

Meeke won four of the seven stages on Saturday, including the opening Ouninpohja – regarded as the sport's biggest test - and a second on its ‘little brother’ Paijala at stage 14.

The Citroen driver was within one second of the leader of any stage he did not win, putting him in a great position to win on his first race back since victory at the Rally of Portugal in May.

Meeke finished with a time of two hours and 22 seconds - 41 seconds ahead of Latvala - while Irishman Craig Breen was a further one minute and two seconds behind the Finn.

Now we really have to do a job. We have to manage our position and that's the difficult part.

We did it when we won in Portugal earlier this year, and in Argentina last year, and we'll use that experience on this one.