Scotland Yard has been granted a further seven days to question a royal marine from Northern Ireland over suspected terrorism offences.

The request to continue to detain Ciaran Maxwell has been approved at Westminster Magistrates’ Court.

It means the 30-year-old from Larne can now be held until Wednesday 7 September.

Maxwell was arrested in a pre-planned swoop in Somerset last Wednesday, and on Friday police were granted an extra five days' questioning time.

The serviceman is being detained on suspicion of preparation for acts of terrorism linked to two dissident republican arms dumps found near Larne earlier this year.

Police have carried out more searches in Larne as part of an ongoing investigation into dissident republican activity.

It follows the arrest last week of 30-year-old Royal Marine Ciaran Maxwell who's from the town. Officers in England have until midday on Wednesday to either release him or apply for more time to question him.

Detectives are also questioning a 27-year-old, arrested in Larne, as part of an investigation into dissident republican activity.

In May, they uncovered a further collection of explosives and bomb parts at Capanagh Forest, close to Larne.

Both discoveries were believed to be related to dissident republican groups.

Police are carrying out further searches in Larne, Co Antrim, linked to the arrest of a marine in England over suspected Northern Ireland related terrorism.

Ciaran Maxwell was detained in Somerset on Wednesday on suspicion of preparation for acts of terrorism in a pre-planned swoop linked to two dissident republican arms dumps found near Larne earlier this year.

The serviceman is from Larne, and following his arrest, PSNI officers carried out searches in the Old Glenarm Road area in his hometown.

On Friday Scotland Yard was granted further time to question him over the suspected terrorism offences.

Police are in Larne again on Tuesday and are searching in the Inver Road area.

Scotland Yard has been granted an extra five days to question a 30-year-old marine from Larne over Northern Ireland related terrorism offences.

The request to continue to detain Ciaran Maxwell was approved at Westminster Magistrates’ Court on Friday.

It means he can be held until Wednesday 31 August.

Maxwell was arrested in a pre-planned swoop in Somerset on Wednesday.

The serviceman is being detained on suspicion of preparation for acts of terrorism linked to two dissident republican arms dumps found near Larne earlier this year.

A Royal Marine arrested on suspicion of Northern Ireland-related terrorism offences in England has been named as 30-year-old Ciaran Maxwell.

He is a serving member of the British armed forces with the Royal Marines unit based at Norton Manor Camp near Taunton.

Maxwell, from Larne in Co Antrim, was arrested in a pre-planned swoop in Somerset on Wednesday.

The operation involved searches at a house and wooded area in south Devon.

Police activity was continuing in Devon on Thursday. Searches are being carried out at a property in Exminster by the Metropolitan Police Service's Counter Terrorism Command and local uniformed officers.

The serviceman is being detained on suspicion of preparation for acts of terrorism linked to the two dissident republican arms dumps found near Larne earlier this year.

PSNI officers have also searched a number of properties near the two forest parks where the weapons dumps were discovered.

Police and the Army are currently carrying out searches in Larne as part of a terrorism-related probe linked to the arrest of a British soldier in England.

Searches are also being carried out at an address and woodlands in South Devon.

Police and army at the scene of ongoing searches of properties in Old Glenarm Road Larne https://t.co/Dn4lKqZxyt 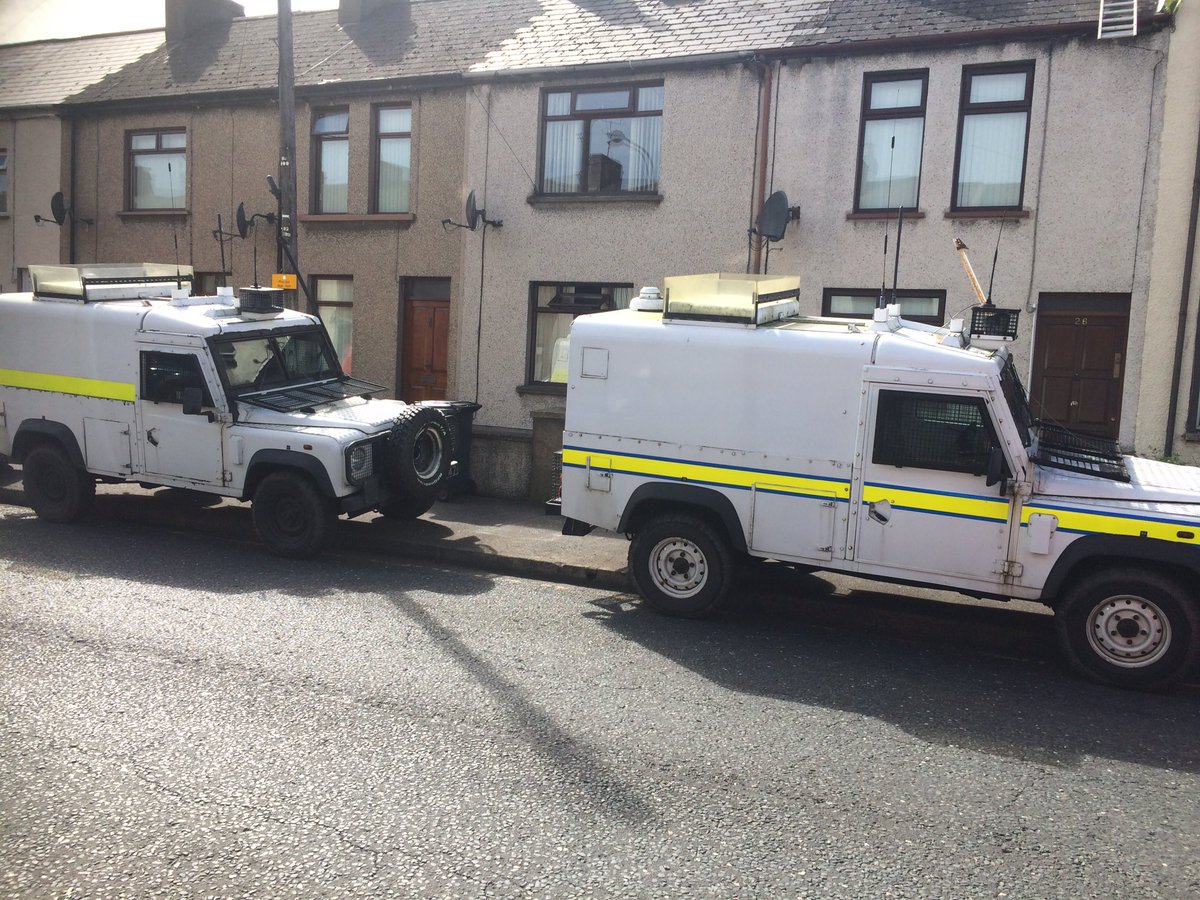 A Royal Marine suspected of involvement in Northern Ireland-related terrorism is thought to have been arrested in connection with the discovery of two terrorist hides in the region.

The 30-year-old was arrested in Somerset on Wednesday afternoon.

He is believed to be from Northern Ireland, it has been reported, and was detained on suspicion of preparation for acts of terrorism in a pre-planned swoop.

It is understood his arrest is related to two major dissident republican arms dumps found in Carnfunnock and Capanagh parks near Larne, Co Antrim, earlier this year.

An armour-piercing improvised rocket and two anti-personnel mines were among the cache recovered at Capanagh in May.

In March, bomb-making items were found at nearby Carnfunnock Country Park.

A serving member of the British armed forces has been arrested in Southwest England on suspicion of Northern Ireland-related terrorism offences, Scotland Yard has said.

The 30-year-old man was detained at 12.20pm at an address in Somerset and has been taken to a West Country police station.

He was arrested by officers from the Metropolitan Police Service’s Counter Terrorism Command, supported by local police, on suspicion of being involved in the preparation for acts of terrorism under section 5 of the Terrorism Act.

No armed police were involved in Wednesday’s operation and a statement said there is no intelligence to suggest an immediate threat to the public.

Metropolitan Police said the arrest was pre-planned and intelligence-led as part of an investigation into Northern Ireland-related terrorism being led by its Counter Terrorism Command, in collaboration with the PSNI and the South West Counter Terrorism Intelligence Unit.

Searches are being carried out by police at an address in South Devon as well as in a wooded area nearby, which has been cordoned off.

PSNI are also carrying out searches in Northern Ireland in connection with this inquiry.