HMS Duncan is the newest ship in the fleet having been commissioned in December last year.

She is a billion pounds worth of state of the art naval hardware. Her radar systems are reckoned to be the best in the world nudging ahead of the Americans.

More: Aerial footage shows the scale of the 2014 Nato summit

I'm told her cannon could land a shell on a target the size of a pizza box twelve miles away, so watch out if you're the enemy enjoying a deep pan!

It was a fascinating to have a tour of the destroyer and hear about the kind of work she'll be undertaking, from patrolling international waters looking for modern day pirates to protecting the new aircraft carrier HMS Queen Elizabeth when she comes into service.

It was also great to meet some of the Welsh crew who were clearly very proud to be serving in their own capital city.

They say they're "overwhelmed" to be back in Wales and on the same vessel.

More: The Red Arrows fly over HMS Duncan and the ITV Wales HQ

Type 45 HMS Duncan will be open to visitors in Cardiff this Sunday, 7 September from 11am to 6pm, in Roath Basin. http://t.co/XxqQKuoFU5 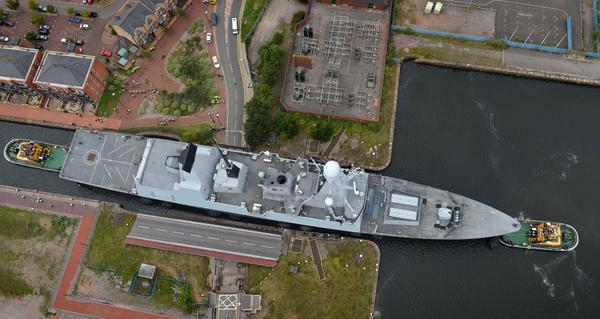 On Sunday the ship will be open to the public, so don't miss this chance to have a look around!