The leader of the Conservative group in the Welsh Assembly, Andrew RT Davies, has quit the post after seven years.

Mr Davies sparked a row last week after accusing plane manufacturer Airbus of "hyperbole" over its warning it might have to switch production out of the UK as a result of Brexit.

In a statement this morning he says it is with 'deep regret' that he stands down from his post, following a meeting of all Tory Assembly Members this morning.

It is with deep regret that I announce that I have today tendered my resignation as leader of the Welsh Conservatives in the National Assembly. This was done in a letter to our Group Chairman following a meeting this morning of all group members.

It has been a huge privilege to serve in this position since 2011, after securing the mandate of the party in a ballot of the membership. It is my firm belief that any Leader of the Assembly Group should secure the same mandate in a full ballot of the grassroots, and I hope that my successor will emerge in that manner.

I would like to thank the Group for their support throughout my leadership, and in particular to express my gratitude to the many dedicated and professional staff I have had the privilege to work with – and for.

I look forward to supporting whoever emerges from the contest to replace me, and I will continue to place all of my efforts into advancing the Welsh Conservative cause both here in Wales and Westminster.

As a party we would achieve nothing without the hard work and dedication of our grassroots and I would like to thank them all for the support they have given me in Wales. Nothing could make me prouder than to have enjoyed their backing throughout this journey.

I would like to thank the Prime Minister for her support and I wish her the very best in delivering for the country and the Conservative Party moving forward.

And finally, thanks to my family, particularly my wife Julia who has supported me each and every step of the way.

I would like to wish my successor the very best in the role - and the Group for their support throughout my leaders… https://t.co/eKyZRGSMe6

Prime Minister Theresa May sent her best wishes, saying she knew Mr Davies would "continue to speak up for the best interests of Wales as we leave the European Union and forge a new role for the whole United Kingdom on the world stage".

Theresa May thanks Andrew RT Davies for his work as Welsh Conservative leader in the Assembly and wishes him well. https://t.co/AdZHGLmbuX 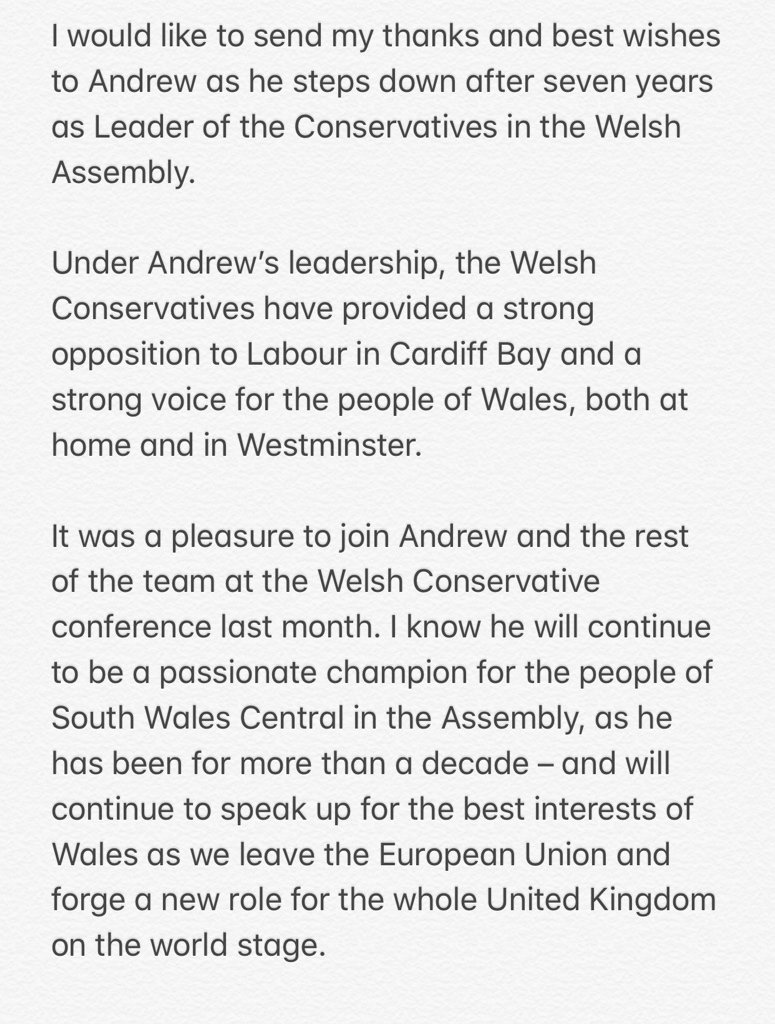 .@andrewrtdavies has made his mark in Welsh politics and I wish him well in future. My full statement here: https://t.co/xwGJNu56EB 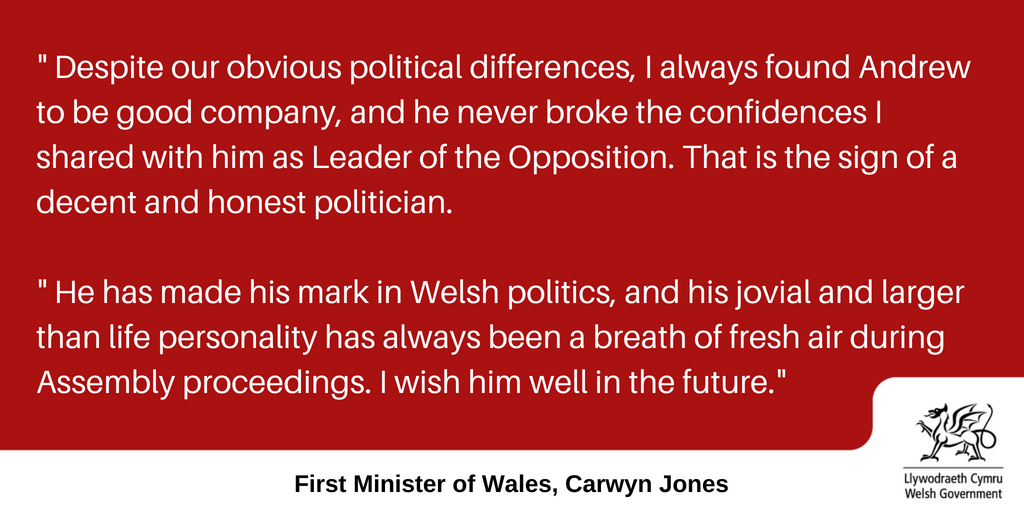 As one of Wales' most high profile 'Leave' campaigners, Andrew RT Davies was made famous by this Brexit speech as the Tory Party Conference in 2016.

Mr Davies was last week accused by a Government minister of making "inflammatory" comments about the warning of aircraft manufacturer Airbus that it could quit the UK over Brexit.

Airbus, which employs 6,400 people in Wales, has said it may have to reconsider the future of operations in the UK if Britain leaves the single market.

In response, Mr Davies said the company was "doing a disservice" to the workers which had made it successful, adding: "You'd think that Airbus was the first company to entertain slashing costs and by extension standards - and it doesn't usually end well.

"We are getting to the business end of the negotiations, and there is a lot of hyperbole flying around."

UK defence minister Guto Bebb, who represents Aberconwy, called on him to retract his "inflammatory" comments, saying: "Shooting the messenger is an unworthy position for a politician to take not least when that politician aspires to lead a government in Wales."

The announcement means the Welsh Conservatives will have leadership contests simultaneously with Welsh Labour and UKIP in Wales.

Andrew RT Davies was first elected to the Welsh Assembly as member for South Wales Central in 2007 and previously held shadow portfolios for transport and education.

Awful that Welsh Conservative leader @andrewrtdavies has been pushed out by Remainers for backing Brexit. Such a decent man

Mr. Davies said today that "politics is an unpredictable business", after Bishop Ryan Cleminson complained his meeting with the former leader was cancelled due to his resignation and he had travelled from Swansea to meet him .

Very sorry Bishop but sadly politics is an unpredictable business - as they say ‘events dear boy events’. My offic… https://t.co/sgdm6zmztb