A late goal by Wilfried Bony was not enough to deny Manchester City three points at the Liberty Stadium, as the visitors claimed a 3-2 win against Swansea City.

Fernandinho had fired City into an early lead, only for Wilfried Bony to head Swansea level in first-half stoppage time.

But Toure put the visitors back in front with his 12th goal of the season and Kolarov got their third with an excellent solo effort.

Bony got his second in time added on to give Swansea hope, but City held on.

City's previous visits to Swansea had ended in a defeat and a draw but, after a difficult period either side of the break, they recovered to claim victory on this occasion.

It's a very wet and windy afternoon at the Liberty. Hopefully today's action will brighten up the occasion! http://t.co/x1icr7QO8f 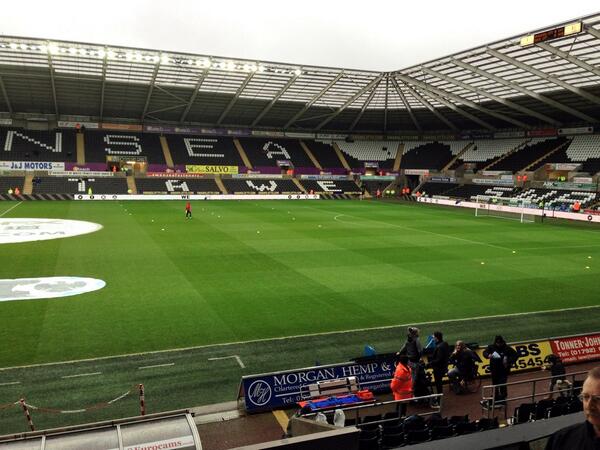 For the first fixture of 2014, it's two changes for the #Swans as Rangel and Routledge replace Tiendalli and Lamah.

Swansea City welcome Manchester City to the Liberty Stadium this afternoon in their first game of the year.

Michael Laudrup warned his Swansea side they must be clinical in front of goal. The Welsh side lost 3-0 when the teams last met in December.

The game comes on the back of a 1-1 draw at Aston Villa, where the Swans dominated but failed to make the most of their advantage.

Swansea will start 2014 in 11th place in the Premier League table, having also safely negotiated the group stage of the Europa League.

But they are just five points above the relegation zone, whereas Manchester City currently sit just one point behind Premier League leaders Arsenal.