A Welsh bus company has come under fire for a "sexist" advert that it has placed on the back of its buses.

New Adventure Travel, which is based in Cardiff and operates services throughout south Wales, is promoting a £3 ticket bus pass with a provocative picture of a woman holding a placard which says 'Ride Me All Day'.

Hey @nat_group aren't half of your customers women? Have you thought this through? #EverydaySexism http://t.co/i4qghEZFSh 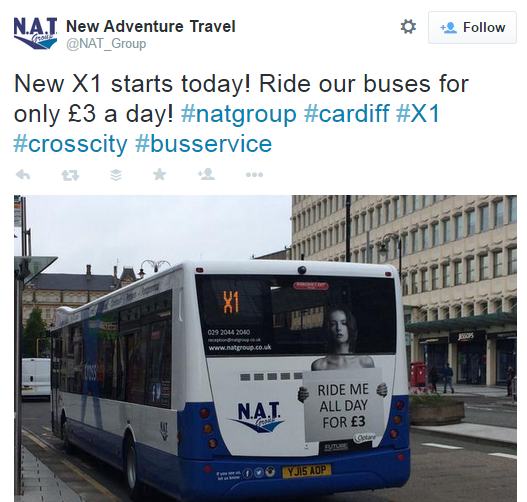 One Twitter user 'Everyday Sexism' - which says it documents experiences of sexism, harassment and assault "to show how bad the problem is" - asked if the company had thought through its advert.

Welsh Assembly member Simon Thomas of Plaid Cymru said the advert was "appalling" and questioned whether the company received Welsh Government cash for running any of its services.

On its website, New Adventure Travel Group Ltd says it's one of 'South Wales’ leading transport providers with over 75 vehicles and counting'.

It also claims to be proud to provide professional sports teams with high quality transport including Swansea City Football Club and the Cardiff Devils Hockey Club.