Groups of offenders have been drafted in to help residents on the flooded Somerset Levels by filling hundreds of sandbags.

The Probation Service is supervising the work, which is being carried out by offenders on Community Payback schemes. 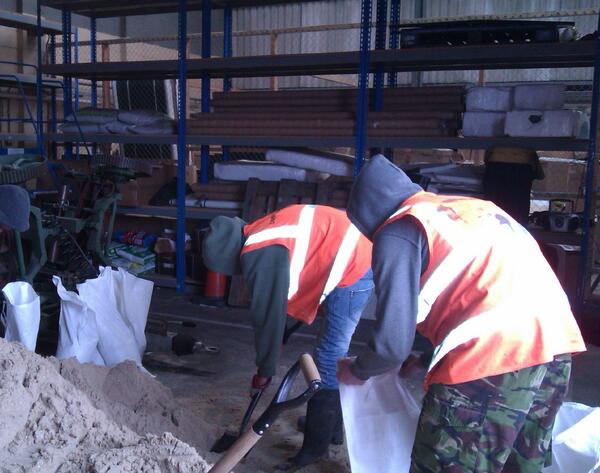 Seven offenders shifted 14 tonnes of sand and filled 600 bags on Saturday, while a group of five filled 750 today.

David Cameron has revealed details of a £10million pound package of support for businesses hit by the floods ahead of a visit to Gloucestershire later.

Small and medium sized firms will be able to access funds so that they can meet clean-up costs and keep trading in the wake of the winter storms. A helpline is also being set up to provide advice, and those who are late filing accounts because of the crisis will not incur penalties.

The Prime Minister has announced a £10 million support package for businesses affected by the floods.

Business Secretary Vince Cable said has said that is "vital" that business hit by flooding are helped as soon as possible.

He said: "It is vital that small businesses affected by the flooding get assistance as quickly as possible."

Mr Cable added: "We know the insurance companies are working to process claims as quickly as possible and we will inform local authorities of their allocations from the Business Support Scheme on Thursday to assist businesses with clean-up costs or help them to continue trading."

David Cameron has said "Government is taking action' on floods as he unveiled a £10 million support package to help small businesses.

The Government is taking action across the board to deal with the clear-up and help hard-working people affected by the floods.

Dealing with these floods will be a long haul, requiring a stepped-up national effort with the whole country pulling together.

We will continue to help the people who need help and protect the communities that need protecting.

Firms that have been flooded or suffered significant loss of trade will be able to apply for help from the new Business Support Scheme.

Workspace provider Regus is also offering free access to wi-fi and refreshments at its business lounges, while Citrix is temporarily waiving charges for companies to try its GoToMeeting software for communicating face-to-face online.

David Cameron has unveiled a £10 million package of support for businesses hit by the floods.

Small and medium sized (SME) firms will be able to access funds so that they can meet clean-up costs and keep trading in the wake of the winter storms.

A helpline is also being set up to provide advice, and those who are late filing accounts because of the crisis will not incur penalties.

The Prime Minister said recovering from the brutal weather would be a "long haul", and he wanted to help companies get "back on their feet".

Read: Army 'could have been sent sooner' to help with floods

Giant pumps being used to help reduce flooding on the Somerset Levels are expected to be switched back on this morning after being switched OFF all day yesterday.

The Environment Agency noticed that serious damage was being done to the banks of the River Parrett and have turned the pumps off so they could stabilise the ground. The 13 pumps have been in operation since Thursday.

The huge scale of the flooding still affecting the Somerset Levels has been revealed by a series of aerial pictures.

ITV reporter Simon Harris took these pictures whilst in a light aircraft on Sunday morning.

Giant pumps being used to help reduce flooding on the Somerset Levels have been switched off because they were damaging a riverbank.

The 13 pumps, which have been imported from the Netherlands, are diverting flood water in an effort to reduce river levels.

But the Environment Agency noticed that serious damage was being done to the banks of the River Parrett and took the decision to turn the pumps off and assess the situation.

The decision was taken to stop for a short period to stabilise the bank so we can restart pumping on Monday. We also have used this opportunity to move the pipes further into the estuary to minimise further damage.

When fully operational the pumps can move more than 7 million tonnes of water per day.

Part of a Dorset beach has been cordoned off following a "large" cliff fall.

Coastguards, the fire service and police were at the scene and people have been urged to stay away from the cliffs.

It is not yet known if anyone was hurt. A coastguard helicopter was used "to determine the state of the remaining cliffs", Solent Coastguard said.

Watch manager Andy Jenkins said: "We did have a report that two people were missing in the area, but they have now been accounted for."

The slip at the East Cliff of East Beach is about a mile along the coast from where Charlotte Blackman, from Derbyshire, died in the Burton Bradstock landslip in 2012.

Another slip at Burton Bradstock happened in January.