The Bristol branch of the campaign group Momentum will gather in Bristol in support of the beleaguered leader this evening.

The Bristol MP for Labour West Thangam Debbonaire has become the latest to resign from the shadow front bench.

In a statement she said:

"I have resigned today from the shadow front bench."

"I was delighted when Jeremy Corbyn asked me to serve as his Shadow Arts and Culture Minister. I gave the role my all and I know many arts and culture organisations valued the opportunity to be consulted about Labour’s position on the arts."

"I have spent the last few months working hard for the constituency; for my boss Maria Eagle, the Shadow Secretary of State for Culture, Media and Sport; and for a vote to ‘Remain’ in the EU referendum last week."

"In Bristol West, we voted overwhelmingly for ‘Remain’, and I know that activists worked their socks off for the campaign. I was therefore very disappointed that Jeremy Corbyn did not put his heart and soul into arguing for our membership of the EU."

"Furthermore, David Cameron’s resignation is likely to spark a general election. We need to be ready to win it. I believe that, with Jeremy Corbyn in charge, we would not be in a position to win over the general public."

"And I know he is not the right person to show strong leadership through Brexit negotiations."

"My resignation letter makes it clear how sincere my respect for Jeremy is and how difficult this decision has been."

"Many constituents have contacted me over the weekend, both in defence of Jeremy and in asking him to resign. Given that opinion is evenly split, I feel I can confidently follow my own views on this matter. I do understand that some people will be disappointed with my decision."

"I know that in time we can move forward as a strong, united Labour Party, working hard for Bristol and the country."

Another West MP has added her name to an ever-growing list calling for a new leader of the Labour Party.

In an open letter to her constituents she wrote:

Elections are the acid test for political leaders and when he became Labour leader I said that Jeremy Corbyn’s job was to deliver the best electoral results for the Party he and I represent.

He has now led the Party into two nationwide electoral tests. In May’s local elections across the country the Party barely held its head above water.

And in the EU Referendum, the Party failed to connect even with voters in scores of seats that have long been held by Labour.

Karin Smyth has held the post of personal private secretary - a junior post - to Shadow Health Secretary Heidi Alexander, who has resigned from the shadow cabinet.

She concluded her letter by calling for a new Labour leader.

I know Bristol people need help and support in difficult times, perhaps now more than ever.

I also know Bristol needs a Labour government. It is my view we can only realistically deliver this with a new leader. 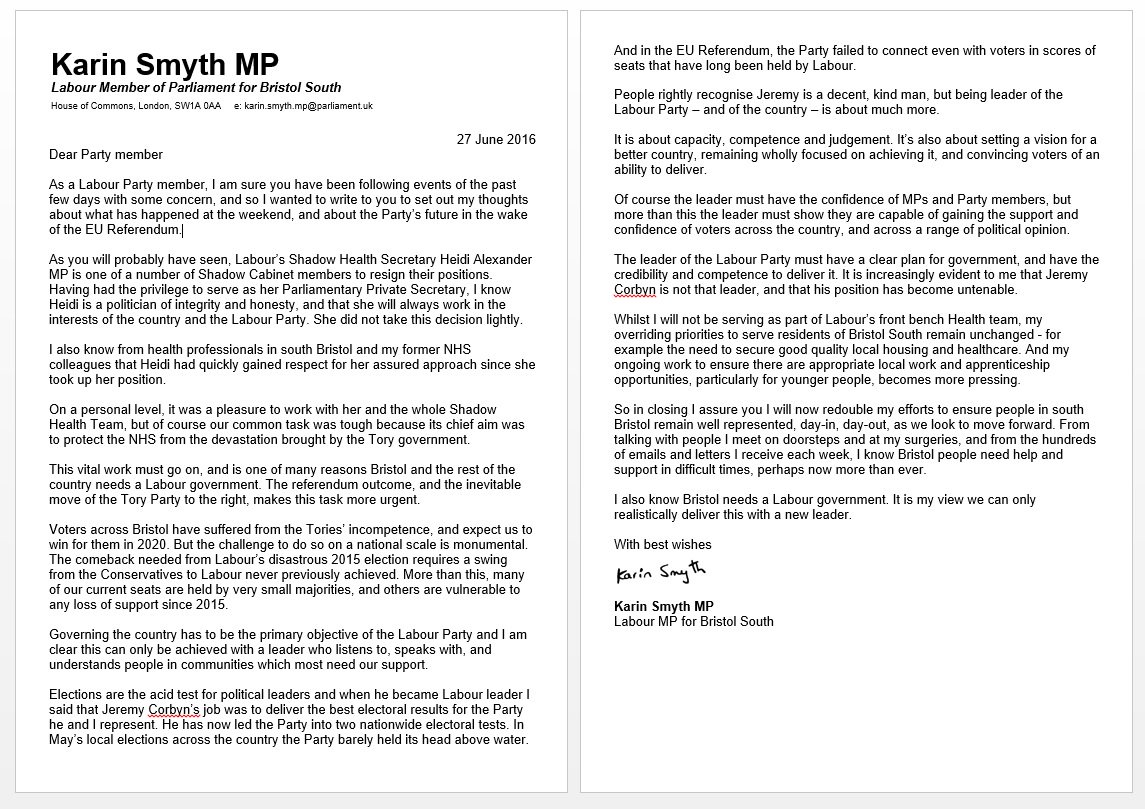