Keith Earls will start at outside centre for Ireland's crucial World Cup battle with France with Jared Payne seemingly unable to beat his foot injury.

Ireland had insisted Payne was ready to return following his heavily-bruised foot and had trained fully on Wednesday, but the Ulster centre was eventually not selected to face Les Bleus.

A combination of Payne's minimal training time and Earls' fine World Cup form will have led Ireland head coach Joe Schmidt to put his faith in the Munster flyer for the 13 berth.

France have been explicit about their intentions to target Sexton with a physical onslaught in Sunday's Pool D decider - but now they will certainly throw everything at Earls too.

Devin Toner has slotted in at lock in place of in-form powerhouse Iain Henderson, with Ulster's 23-year-old moving to the bench.

Schmidt may well look to unleash Henderson for the closing stages, when France will undoubtedly release a bench full of beasts in an attempt to raise the brutality one more level.

Cian Healy will make his first full start since recovering from neck surgery in May, having taken a seat on the bench for Ireland's campaign so far.

Ireland are yet to fire fully at the World Cup despite earning three straight victories to ensure quarter-final qualification.

Schmidt has kept his powder dry on a set of specially-devised World Cup plays, that Ireland now expect to roll out for the first time against the French.

The pressure will therefore be on Schmidt's men to turn training-ground prowess into match acumen when it matters most. 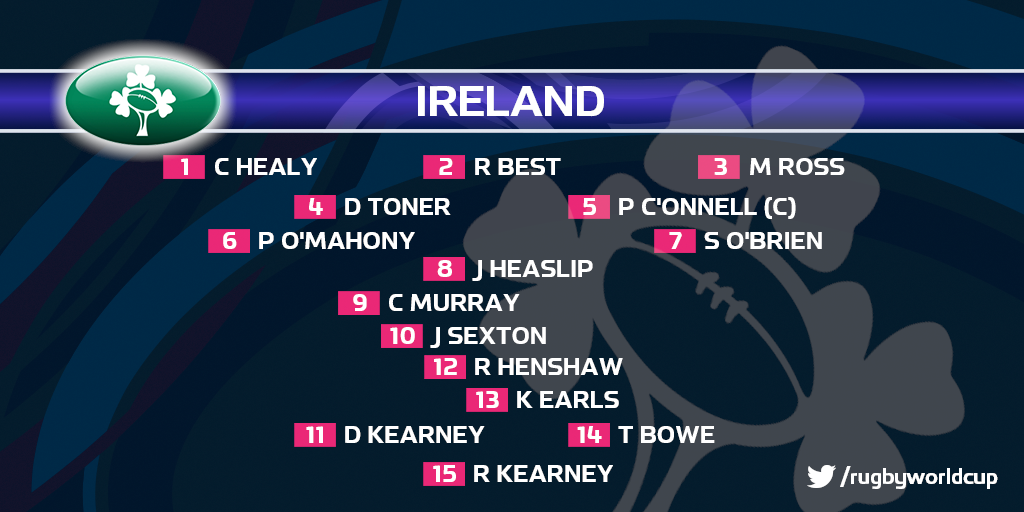