Tony Martin belatedly claimed the Tour de France leader's yellow jersey for the first time on Tuesday with a brilliant solo victory on Stage 4 to Cambrai.

The German made his move three kilometres from the finish of a dramatic 223.5km route from Seraing in Belgium across the cobbles of northern France and held off a charging peloton.

The riders were wary of the cobbles, some of the sectors of which are used in the Paris-Roubaix one-day classic known as 'the Hell of the North'.

Froome did not even see a cobble as his Tour defence ended 12 months ago after three crashes in two days, but this time was guided expertly by the brilliant Geraint Thomas.

The main moment of concern came when Froome wobbled in the gutter after losing his team-mate's wheel.

The 30-year-old was second to Thomas coming off the final cobbled sector and wanted to attack, with Alberto Contador (Tinkoff-Saxo) and Nairo Quintana (Movistar) left behind.

But there was no collaboration in the select eight-man bunch, which included defending champion Vincenzo Nibali (Astana), and Martin next made his successful move.

Froome will be content to have conceded the yellow jersey at this early stage and will hope to add to his British record 15th day in the maillot jaune later in the race. 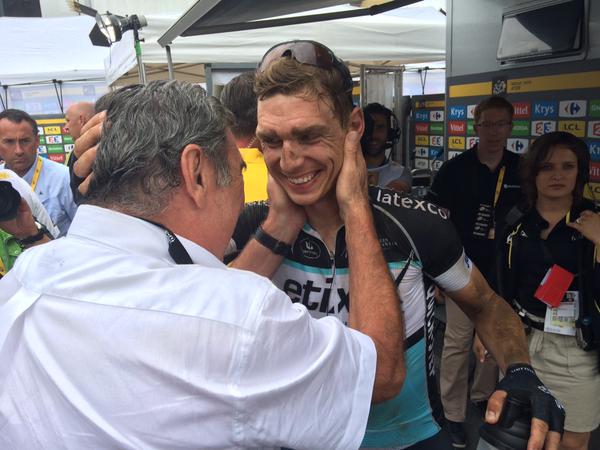