Alberto Contador has abandoned the Tour de France. The two-time Tour winner, one of the pre-race favourites, climbed into the Tinkoff team car with 100 kilometres of the 184.5km ninth stage between Vielha Val d'Aran and Andorre Arcalis.

The Spaniard had been suffering with injuries suffered in crashes on stages one and two, and his team said he had awoken with a fever on Sunday morning.

Contador, who won the Tour in 2007 and 2009, had lost time in the general classification battle in the wake of his injuries.

As Chris Froome moved into the yellow jersey with victory on Saturday's stage eight, Contador conceded a further one minute and 41 seconds to drop to 20th in general classification, three minutes and 12 seconds down. 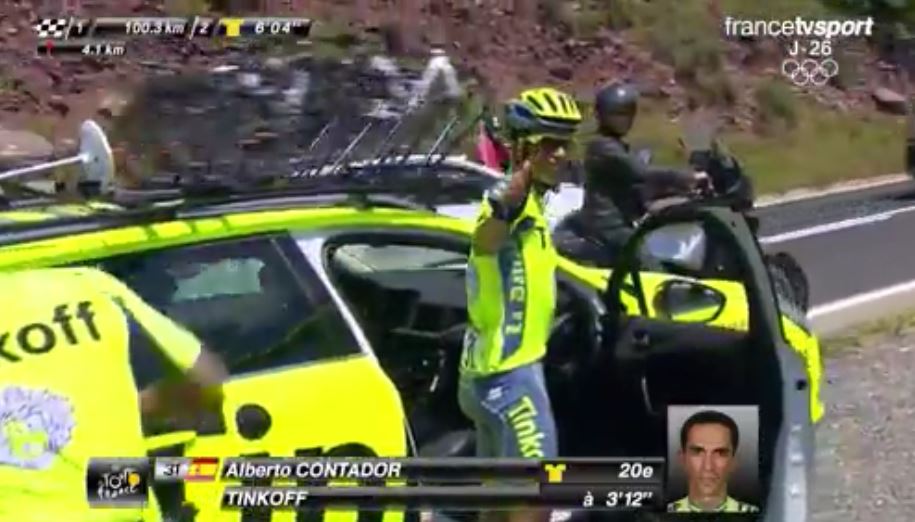 Alberto Contador hopes his body can remain intact for the next three weeks as he bids to become the first man to win the Tour de France and Giro d'Italia in the same year for the first time in 17 years.

It could be one of the most open and exciting General Classification battles ever seen at the Tour. Ahead of Saturday’s Grand Depart in the Dutch city of Utrecht, Luke McLaughlin assesses the main contenders.

Spanish rider Alberto Contador has said that 2016 could be his last year in professional cycling.

The 32-year-old, who is expected to compete in the Giro d'Italia and the Tour de France this year with Tinkoff-Saxo team, told Spanish media on Monday: "I would like to retire being at the top. This year, I will definitely be competing and also next year.

Alberto Contador has ruled himself out of the Vuelta a Espana having said he has suffered a setback in his recovery from the injury that ended his Tour de France bid.

Spanish rider Alberto Contador says his broken leg will keep out for a prolonged period after abandoning the Tour de France.