Chris Froome will target victory in next year's Tour de France after watching organisers announce one of the toughest routes in recent history on Tuesday.

The four-time Tour winner was on hand in Paris as ASO unveiled a route which visits all five mountain ranges in France, with the serious climbing starting as early as stage two and spread throughout in a move designed to encourage attacking racing.

There are only 36 kilometres of time trialling in the 3,470km total distance, all on the penultimate stage as the battle for yellow is set to be decided against the clock on the climb to La Planche des Belles Filles.

Froome was quick to note the lack of time trialling in a route which may well be more suited to his Ineos team-mate and defending champion Egan Bernal, but said it was a challenge he would relish.

"I think it's a brutal Tour - probably the hardest I've seen in the last five or six years at least," he said.

"It's great - there's loads of opportunities for the general classification to play out and the main rivals to go head to head. That's what everyone wants to see. It should be an exciting race, hopefully it will live up to the same standards as this year.

"There are no guarantees in sport but I'm going to give it everything I have."

The 34-year-old missed this year's Tour after suffering huge injuries in a high-speed crash at the Criterium du Dauphine in June, but he is ahead of schedule in his recovery and plans to ride in the Saitama Criterium, an exhibition event, later this month.

"Given the injuries I've had I think a lot of people would have seen that a career-ending crash," he said. "I'm extremely lucky to be where I am now. I just see it as such an amazing opportunity that I have ahead of me now, that we're even talking about coming back for next year.

"I've still got a big plate on my hip at the moment. Hopefully at the end of this month we'll remove that. From that moment on hopefully things should start to improve even more."

There will be no return to either Alpe d'Huez or Mont Ventoux in next year's Tour and only two stages in the traditional battleground of the Pyrenees, but the Massif Central and the Alps will play a key role before a final phase in the Jura and Vosges.

The 2020 edition will begin on June 27 with two stages starting and finishing in Nice, including a tough second day which includes almost 3,700 metres of climbing. 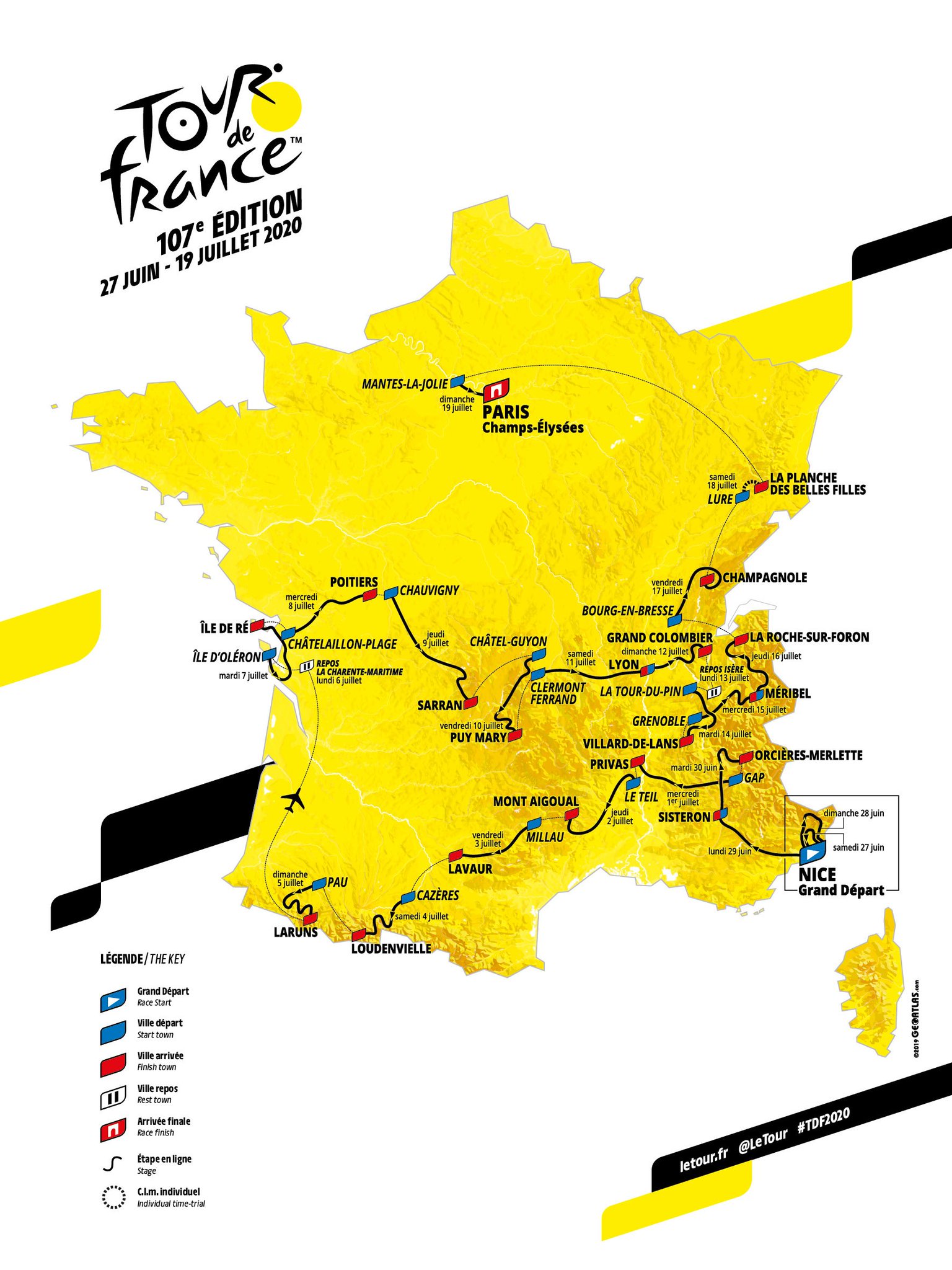 It is notable that the battle for yellow will not conclude in the high mountains, as is usual, a year after adverse weather saw stage 19 to Tignes stopped when landslides covered the roads before the penultimate stage to Val Thorens was severely shortened.

It was on stage 19 that Bernal finally took the yellow jersey off the shoulders of Frenchman Julian Alaphilippe, who rode a brilliant race to enjoy an unexpected 14 days in the lead.

Alaphilippe denied Ineos their usual control of a race they have won in seven out of the last eight years, a scenario organisers will hope plays out again.

Ineos team principal Sir Dave Brailsford said they would now go away and break down the details of the route, but he had every confidence Froome could be in the mix for a record-equalling fifth title.

"When he sees this course and this route he'll be ready to go," Brailsford said.

"He knows the roads down in Nice and that first block very well. It's a hard, mountainous race.

"People are going to be really tired at the end of this race, so that final mountain time trial will be important. Somebody like Chris and the guys will be looking at that thinking 'I can win that.'"