Mark Cavendish experienced further Tour de France disappointment as Chris Froome struck a blow in the race for the yellow jersey ahead of Monday's third stage in Belgium.

Ned Boulting spoke to Etixx-Quick Step rider Michal Kwiatkowski after Stage 2. The Pole admitted he was gutted to ride with his 'heart' all day in an effort to get his team-mate Tony Martin in the yellow jersey, but lose out to Fabian Cancellara after a tight sprint finish.

Cav was downbeat after missing out on his 26th Tour stage win, understandably, but nevertheless he joked that he could find work as a lead-out man after setting up Andre Greipel for the win on Stage 2.

Etixx-Quick-Step sprinter Mark Cavendish took to Twitter after the frantic finish to Stage 2 to defend himself in the face of accusations that he cost his team-mate Tony Martin the yellow jersey.

After finishing fourth (Fabian Cancellara's third place was enough to earn four bonus points and so move ahead of Martin in GC), Cav tweeted that he was 'gutted' that Martin wasn't in yellow. The Manx rider, who has 25 Tour stage wins to his name, called his critics 'imbeciles' who view cycling as a computer game. 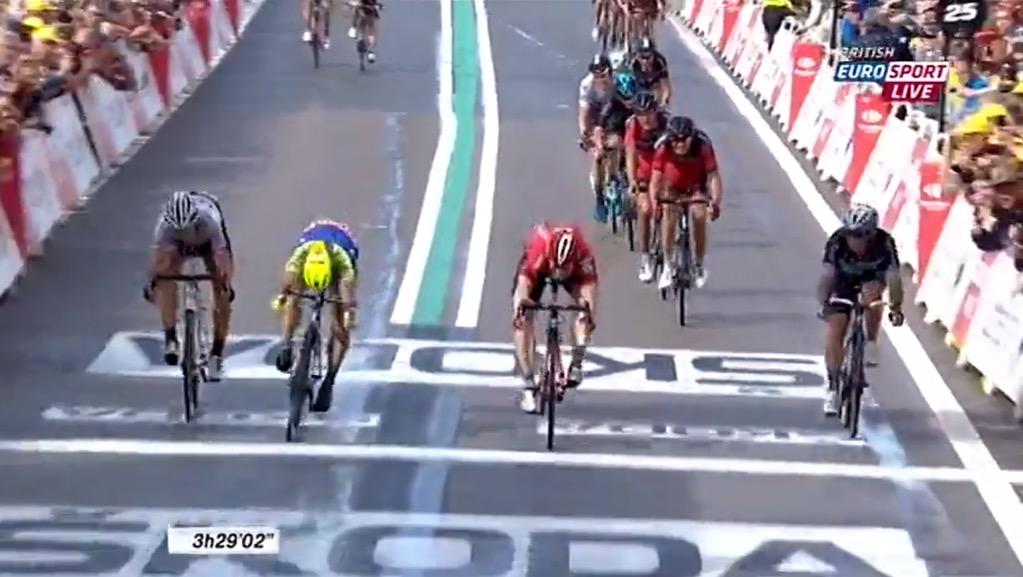 ...computer game. Problem is, social media & TV are platforms for them to be heard. Gutted for @tonymartin85. Congratulations @AndreGreipel.

Sky leader Chris Froome admits he couldn't have asked for a better start to the 2015 Tour, as he gains serious time on some of his GC rivals.

German sprinter Andre Greipel revealed his pre-Tour objective was to win one stage, which he has done on the second day of the race. Anything more will be a bonus, the 'Gorilla' told Ned.

Our reporter Ned Boulting caught up with new GC leader Fabian Cancellara after Stage 2. The Swiss rider edged out Mark Cavendish for third place on the line and that time bonus cost Cav's team-mate Tony Martin the yellow jersey.

Team Sky had a very good day on Stage 2, staying clear of trouble in chaotic conditions to see Chris Froome take significant time out of some of his GC rivals. Sky workhorse Geraint Thomas fell but got up to play his part, as he told Matt Rendell.