Team Sky leader Chris Froome mounted a daring attack on his GC rivals in the closing stages of Stage 8 to take the win and with it the leader's yellow jersey – albeit perhaps earlier than the defending champion would have liked.

Froome's bold descent was the move that won him the day, as he hunched right over the front of his bike going downhill to gain vital seconds on main rival Nairo Quintana.

With BMC's Greg Van Avermaet dropped early on a challenging day in the Pyrenees, Team Sky's Froome assumes the overall lead of the race by 16 seconds from fellow Briton Adam Yates of Orica-BikeExchange.

It was the fifth victory for a British rider in the first eight stages of this Tour following three early successes for Mark Cavendish and Friday's win for his Dimension Data team-mate Steve Cummings.

With Froome in yellow, Cavendish in the points leaders' green jersey and Yates in white as the best young rider, the Union Flag is flying high in France.

Cavendish won the opening stage here, making this only the second Tour in which two different Britons have worn the yellow jersey, following Chris Boardman and Sean Yates in 1994.

In Froome's previous Tour wins in 2013 and 2015, he took control of the general classification battle by winning the first summit finish of the race, but here he made his move a day earlier than might have been expected as he chose the long descent off the last of the day's four categorised climbs.

As Movistar's Nairo Quintana reached to grab a water bottle at the summit, Froome burst clear and he showed he was willing to take risks on the 16km descent to the line.

Hunched low down on his bike but still pedalling as fast as he could, the 31-year-old barrelled down the mountain at speeds topping 80kmh as he edged further and further clear of the chasing pack, leading by as much as 22 seconds.

"It was really just a spur of the moment thing," Froome said of his decision to attack.

"I felt like a kid again, just trying to ride my bike as fast as I could.

"I was taking a risk but I'm glad I did. I couldn't be happier to be back in yellow."

Froome said his descending style was something he picked up racing team-mates in training, but it invited comparisons to Graham Obree, the Scottish rider who twice broke the world hour record in the 1990s and was known for his unusual positions on the bike.

"You really kind of think of Graham Obree and that eccentric British element," Sky team principal Sir Dave Brailsford said. "I think that's something people can warm too.

"Everyone says we're predictable so we said this year let's be unpredictable and make people guess what we're going to do."

Yates, who insists he is not a GC contender, was also there to strengthen his hold on the white jersey he took on Friday in spite of his bizarre collision with the flamme rouge banner as it collapsed near the finish line in Lac de Payolle.

Van Avermaet began the day almost six minutes clear in yellow, but the Classics specialist was no match for the Col du Tourmalet and was dropped on the famed hors categorie climb mid-way through this challenging 184km stage from Pau, coming home almost 26 minutes down.

With Froome in yellow, Yates is on the same time as third-placed Joaquim Rodriguez of Katusha.

Martin is fourth, 17 seconds back, while Quintana is sixth, 23 seconds down and four off the pace of his team-mate Alejandro Valverde.

Alberto Contador's hopes of challenging for yellow could be over after the Tinkoff rider suffered on the final climb, giving up one minute 41 seconds to Froome to fall three minutes 12 seconds off the pace overall.

The Spaniard, who crashed twice in the opening days and has suffered since, said: "I did the best I can. We are going to talk with the rest of the team for the future because Roman Kreuziger is better placed than I am."

Kreuziger is 12th overall, 34 seconds back. 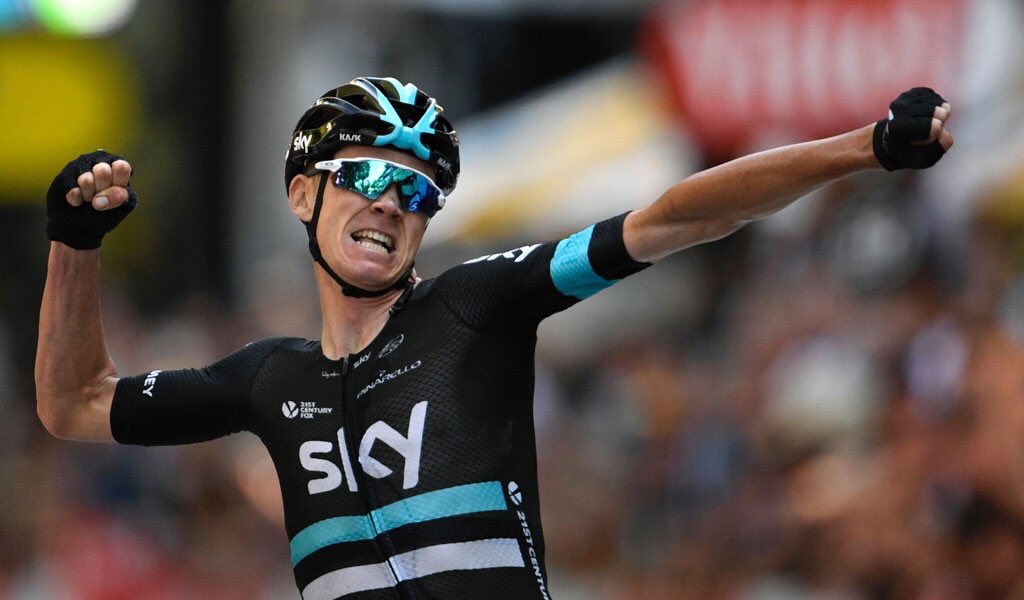 Another man to suffer was Katusha's Michael Markov, who became the first man to abandon this Tour as he succumbed to the injuries he has been carrying since the opening stage. The Tour had never previously passed stage six without a rider withdrawing.

With only 16 seconds' advantage, Froome's rivals must now hope there is a way to make him suffer on Sunday, when the riders face three category one climbs and the hors categorie ascent to Andorre Arcalis as the race dips into Spain and Andorra.

"I did have to spend a lot of energy pedalling on my own in the last 10km," Froome said.

"I didn't have much left to be honest so let's see how tomorrow is going to be."