There are concerns about pollution in the River Sow after a major fire broke out at an industrial estate in Stafford.

One of the roads near the major fire in Stafford has now been re-opened.

Some industrial units are still closed off whilst crews continue to work on putting out the fire.

Update for Stafford residents that Astonfields Road is now re-opened following the major fire. Some industrial units remain closed off.

ITV News Central has been told one person was in the building of a major fire which broke out at an industrial estate in Stafford.

The fire took place at a unit owned by Global Hygiene LLP on Drummond Street.

A spokesperson from the company said the person was evacuated safely.

Staffordshire Fire and Rescue Service has told us the fire is now contained, with more than 10 firefighters still at the scene this morning.

There were explosions yesterday as firefighters battled to stop the warehouse fire spreading to 40,000 litres of industrial oil.

A director of Global Hygiene said:

“The fire that broke out on the Astonfields industrial estate in Stafford on the morning of March 2, 2016, originated in a Global Hygiene building that was under construction.

“There was one person in the building at the time the fire started and he was evacuated safely. Some of the neighbouring units on the technology park were also evacuated while the fire was being put out, to ensure the safety of everyone on site. We are very grateful to the fire services who responded very promptly to the emergency call.

“It is currently too early to comment on the causes of the fire, but Global Hygiene will work closely with the fire services and police services and perform a thorough investigation in the following days. A detailed statement will follow when more information is available.”

More than 50 firefighters have spent the day tackling a huge fire on an industrial estate in Stafford.

There were explosions as firefighters battled to stop the warehouse fire spreading to 40,000 litres of industrial oil.

It took more than fifty firefighters to contain today's fire in Stafford.

You can watch ITV News Central footage of the fire at its peak in the video below.

Eyewitnesses who saw the large fire at a warehouse in Stafford have told ITV News Central about seeing the scale of the fire.

Nathan Hordern owns a company nearby:

Ten fire crews are now left at the scene of a major warehouse fire in Stafford.

The fire was contained earlier this afternoon, after being reported at around 8.43am this morning.

Local officers from the Environment Agency are on site at the Astonfields Industrial Estate to monitor pollution levels.

Firefighters are still working to put out the fire, although it has now been contained.

.@envagencymids officers are on the ground monitoring for any signs of pollution https://t.co/BAHfQXYnmI

Residents around the Ashtonfields industrial estate are being warned to continue to stay indoors with their windows shut as the fire at a recycling centre is brought under control .

Staffordshire Fire and Rescue service say there is still a significant risk of smoke inhalation. 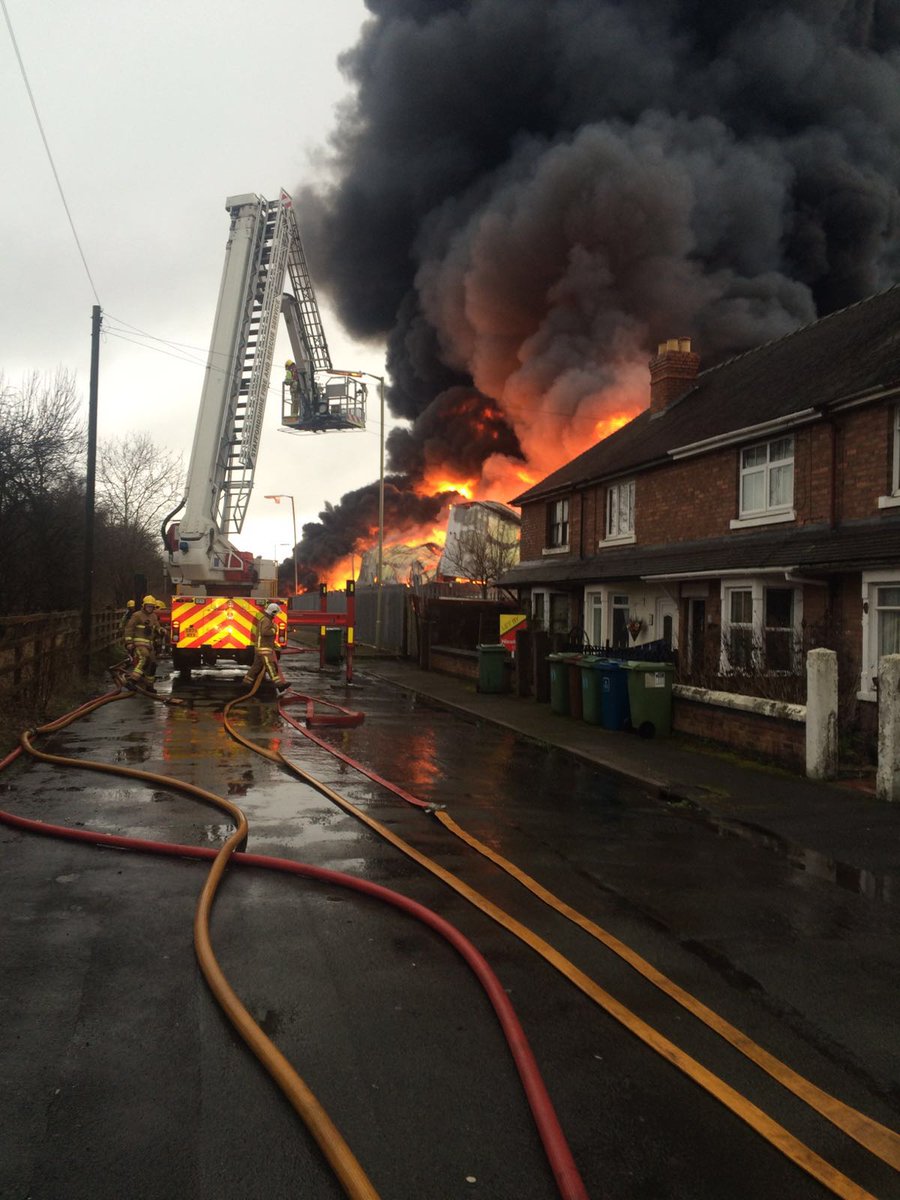 A 50m evacuation zone remains in place around a major fire at a recycling plant on an industrial estate in Stafford.

The blaze started this morning at Global Hygiene LLP on the Ashtonfields industrial estate.

12 crews were called to the scene to contain the fire, over fears it could spread to a neighbouring building, containing 40,000 litres of oil.

We are working with partners to ensure that the fire at Global Hygiene LLP does not spread to neighbouring businesses. #Astonfields

One person has been treated for minor burns.