Unidentified gunmen have seized two Ukrainian journalists in Crimea, Reporters Without Borders said, warning that those behind attacks on the media were trying to turn the region into a "black hole for news".

"We demand that they (those controlling Crimea) provide immediate information about their location and state of health, and that they release them without delay," Christophe Deloire, secretary general for Reporters Without Borders, said in a statement.

He claimed that Crimea is turning into "a lawless region controlled by armed bands," adding: "The frequency of deliberate attacks on journalists and the scale of the censorship suggest a desire to turn the region into a black hole for news and information."

Pictures: The Awacs planes Nato is sending to monitor Ukraine

Maksymenko disappeared with Kateryna Butko and Aleksandra Ryazantseva, two activists from the Maidan protest movement which backs the new government in Kiev, while Kromplyas was seized with driver Yevhen Rakhno, Crimean journalist Oleksiy Byk from the Glavkom news website, told the watchdog.

The leader of the Crimean Tatar community, Refat Chubarov, said the result of Sunday's planned referendum on transferring the Ukrainian region to Russian rule "has already been decided by Moscow."

"There are troops in the streets. There are 30,000 armed men, armoured vehicles, planes landing with foreign troops, and the administrative buildings have all been seized," he told Reuters today. "It's a fake referendum, an attempt to provide cover for this aggression."

Chubarov, who has called for a boycott of the referendum, described newly installed leaders in Crimea as a "puppet government" and appealed to the outside world to help the Tatar community.

"We have neither the weapons nor the strength to stop this injustice on our own," he said.

More: Troops take over munitions base in Crimea

Members of a pro-Russian self defence unit took an oath to Crimea government in Simferopol today.

The oath came on the same day Russian forces took over a military hospital and a missile base in Ukraine's Crimea peninsula.

Read: Troops take over munitions base in Crimea

David Cameron said in a speech to the House of Commons this afternoon that plans to hold a referendum in Crimea on Sunday to formalise Russia's control over the province "will be illegal, illegitimate and will not be recognised by the international community."

ITN cameraman Sean Swan has tweeted a picture of armed men at a munitions base in the Crimean town of Chernomorskoe.

Some 200 "Russian" Troops take over a munitions Base in Chernomorskoe Crimea. http://t.co/blz0SspXLg 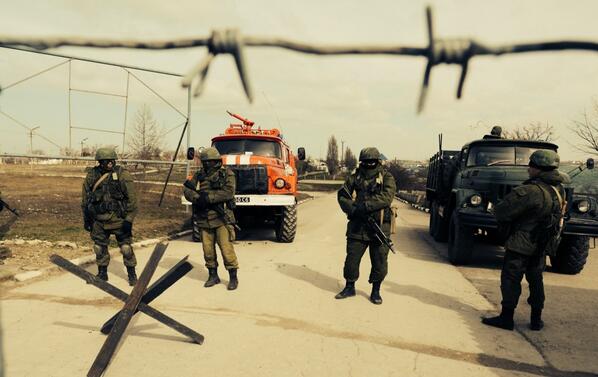 Crimea has invited international military observers from the Organisation for Security and Cooperation to Sunday's referendum on joining Russia, Russia's official news agency Ria has reported, citing a Crimean official.

It said the invitation had been issued to the Vienna-based security and human rights organisation by the region's pro-Russian parliament.

Last week a group of OSCE observers were blocked from entering Crimea, with warning shots reportedly fired at the mission on the third day they attempted to enter the country.

Russian troops have opened fire during takeover of Ukrainian military post in Crimea - no-one was wounded - according to the Interfax news agency which was quoting a Ukrainian base commander.

The unnamed officer from the motor vehicle battalion of the Ukrainian navy said Russian troops broke in to the base near the inland town of Bakhchisaray some time after 2pm (noon GMT), took mobile phones from the Ukrainians and began trying to remove vehicles.

None of the Ukrainian troops was hurt and the base commander was trying to negotiate an end to the action.

A Ukrainian naval officer says he is a hostage of Russian soldiers who took over his Western Crimea base overnight, ITV News International Correspondent John Irvine reports.

Read: Ukrainian and Russian soldiers in stand-off at Crimea military base

ITV News crew in eastern Ukrainian city of Donetsk filmed an elderly lady with a Ukrainian flag being attacked by pro-Russian protesters after challenging their views.

She was rescued by the police, only to be attacked again when the pro-Russian protesters threw fireworks at her.

Russia troops tightened their grip on Crimea as huge political rallies were held across the country.

The 80 or so-strong group, who were supporting 50 civilians, blocked off the entrance to the airport near the village of Saki and established machine-gun posts along the landing strip, spokesman Vladislav Seleznyov said.